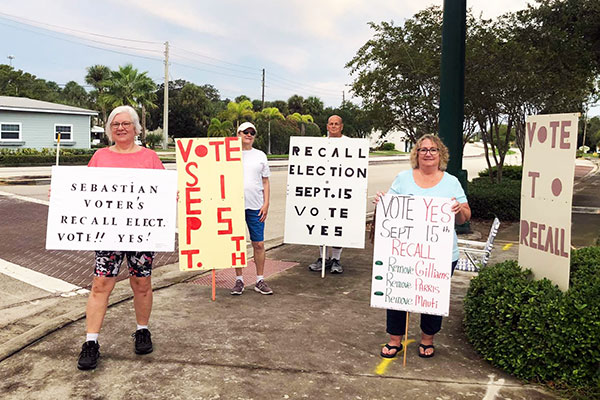 Voters in Sebastian could be making history Tuesday if they decide to recall Damien Gilliams, Pamela Parris, and Charles Mauti.

The PAC group, known as Sebastian Voters Against Gilliams and Parris, were seen holding signs early this morning at multiple locations in Sebastian asking people to vote ‘Yes’ for the recall.

Gilliams and Parris say they did everything they promised to do, which was to stop the annexation and ban all spraying at our parks and near our waterways.

Unfortunately, they voted to stop the spraying but had no plan to handle the weeds’ overgrowth or the ant problems that kept children out of the parks. The canals have not been maintained, and now it is costing taxpayers more money to get them under control.

Most cities, such as Fort Pierce, slowly implemented a new program to eliminate Roundup instead of voting for a full ban.

In 2018, Mayor Ed Dodd opened the door that allowed the Council to ban Roundup. The city staff was already planning to test alternatives. Dodd also spent almost two years pushing it through, and started the Sustainable Sebastian project.

Damien Gilliams is accused of voter intimidation and harassment after confronting the recall group several times as they collected signatures at Riverview Park.

Eventually, a judge dismissed every complaint in the lawsuit.

Pamela Parris has also made several controversial statements, including one where she called Sebastian citizens fat & obese and our snowbirds “Carpetbagger Yankees.”

Parris would then deny saying it, and accused Sebastian Daily of creating falsified information. We posted a screenshot showing the comments made by Parris on her Facebook page. However, she denied writing it and then accused the press (trash tabloids) of hacking her social media account.

Charles Mauti was added to the recall after the State Attorney’s investigation concluded that an illegal meeting took place on April 22, 2020. Damien Gilliams and Pamela Parris joined Mauti in the meeting where they wanted to fire city staff and remove Ed Dodd as mayor. Then they appointed Gilliams as the mayor. Sebastian citizens saw this as an illegal coup to take over the City of Sebastian.

Gilliams and Parris were arrested and charged criminally for violating multiple Sunshine Laws and perjury after lying to investigators. Mauti is cooperating with the State Attorney’s Office.

In Sebastian, there are four polling locations for the recall:

To find out your polling location, visit the Indian River County Elections Office.

There is also a special City Council meeting tonight for a budget hearing. The meeting starts at 6:00 p.m. inside City Hall.