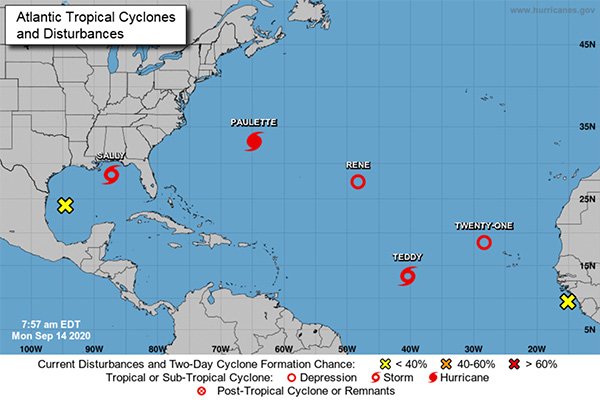 Several tropical cyclones and disturbances currently in the Atlantic and Gulf of Mexico.

The good news for Sebastian and Florida, we won’t see any of these storms, at least for right now. There’s one disturbance near Africa that we will monitor during the next two days.

A tropical system in the Gulf of Mexico is producing disorganized showers and thunderstorms. Further development is not expected, according to the National Hurricane Center (NHC).

There’s another tropical wave near the coast of Africa producing disorganized shower and thunderstorm activity. We are monitoring this system as it moves westward at about 10 mph. There’s only a 40 percent chance of formation during the next five days.

Tropical Depression Twenty-One is moving northward today and northwestward tonight. The depression is expected to be short-lived, according to the NHC.

Hurricane Paulette is located over northeastern Bermuda with sustained winds of 90 mph. Paulette is expected to make a turn to the northeast and head out to sea.

Tropical Storm Rene is expected to degenerate later on Monday due to the north’s strong sheer’s ongoing impact.

Tropical Storm Sally produced a lot of rain in Florida last weekend and will continue to intensify during the next 24-36 hours. Sally is expected to be a dangerous slow-moving hurricane near the coast of southeastern Louisiana, Mississippi, and Alabama.

Facebook Ad Targeting Scam: Don’t fall victim to ads that look too good to be true