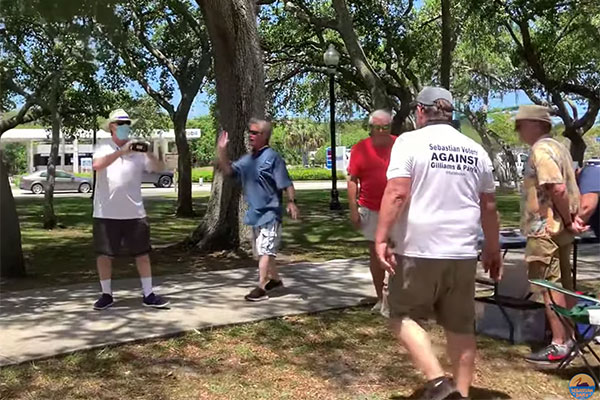 Councilman Damien Gilliams appeared during a recall petition signing to harass and intimidate, according to residents.

Several residents are accusing Council member Damien Gilliams of harassment and voter intimidation after confronting people who were signing the recall petitions.

Citizens also believe that he and Pamela Parris are behind a plot to label the recall members a “hate group” along with their personal friends.

Parris recently asked for a police escort when leaving the city council meetings, to make it appear that her safety was an issue around the recall members.

However, she was seen confronting the recall members in a neighborhood where they were going door to door for signatures.

Residents say the Councilwoman is wasting police resources just to make her point.

So is the Sebastian Voters Against Gilliams and Parris a hate group? Let’s look at a timeline.

On Saturday, February 22, 2020, Damien Gilliams showed up at Riverview Park to harass people who were holding up recall signs. He threatened Tracey Cole, the group’s founder, with a lawsuit as well as fines.

But at the same time, Gilliams offered people cold water and said he supported democracy. The people there felt it was just intimidation.

According to the police report, Gilliams and son gave two different accounts on how the vandalism was discovered, which caused many people to think the councilman egged his own vehicles to frame the recall members.

Soon after, Gilliams used the city council meeting to grandstand, accusing people in the recall group of egging his vehicles without any evidence to back up his claim.

Residents who use Facebook then had reason to believe that Damien Gilliams is using a fake account under the name Vinnie Sarcucci to harass, threaten, and intimidate the recall members.

There’s a lot of speculation that a close friend of Gilliams is also using the same Facebook account to attack and discredit the local press when publishing articles about the recall effort.

Here’s the screen capture of what he wrote.

On Saturday, May 16, 2020, the recall group met at Riverview Park for volunteers to signup with the group. As people arrived, Damien Gilliams began yelling on a bullhorn at people who were signing up to volunteer. People in the park saw this as harassment and intimidation.

Bob Bedea, who was arrested after hitting a Sebastian Police Officer, was also present with Damien Gilliams. Bedea rode his bicycle all around the park and in between the recall volunteers. Next, Bedea was seen standing with Gilliams while he was on the bullhorn.

Here’s a video of Damien Gilliams yelling on the bullhorn at the recall members.

Citizens in the park called the police, and they asked Gilliams to leave.

On Wednesday, May 20, 2020, the recall group rented Riverview Park for the petition signing. Again, Damien Gilliams showed up at the park with another individual from his bar. Gilliams was seen harassing, intimidating, and demanding to see permits for the recall signing. The people there signing the petitions believe it was voter intimidation.

Sebastian Daily was there at the time and filmed some of the recall members asking Gilliams to leave the park. They followed him out to the sidewalk until police could arrive. As Gilliams was seen bullying, he was accusing the recall members of bullying him.

Here’s the video of Gilliams arriving at the park.

Gilliams was seen waving at motorists and asking the recall members to confront him on the sidewalk. Again, the police were called and asked Gilliams to leave the park.

That same week, Councilwoman Pamela Parris confronted members as they were going door to door in a neighborhood collecting signatures for the recall. They saw this as voter intimidation.

Residents want to know why Pamela Parris needs a police escort at the city council meetings if she’s going to confront them in a neighborhood. Again, citizens say that the only people who think they are a “hate group” are the people getting recalled and their close friends.

On May 27, 2020, Damien Gilliams tried to harass and intimidate the recall group again by taking a picture of them as they attended a city council meeting. Gilliams stood up from his chair on the dias and took a picture of Traci Cole bending over.

“Damien took an inappropriate picture of me during the council meeting. This is the disrespect he shows to all Sebastian voters,” Tracey Cole said.

“The fact that a council member would stand up with his phone and take a picture of me bending over getting info out of a box. I believe this borders on sexual harassment since I have no idea what he has done with the picture or who he has shared it with,” she added.

As Gilliams and Parris continue to label the recall group a “hate group,” there hasn’t been any evidence of hate or violence.

Citizens admit they are “fed up” and “angry” after Mauti, Gilliams, and Parris tried a coup to take over the city in April 22nd meeting, but that shouldn’t label them a hate group.