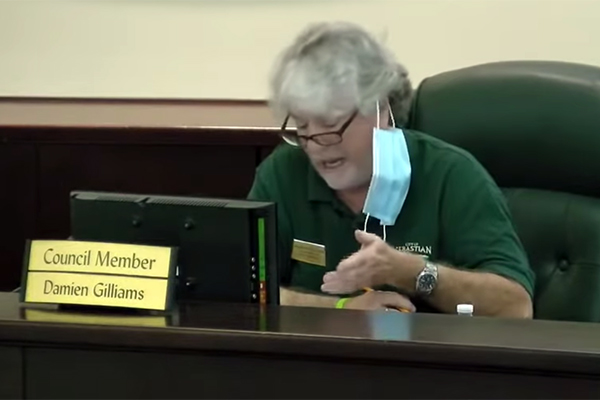 We reached out to a local attorney who spoke on condition of anonymity about Gilliams’ allegations.

“Good luck with that, he can’t fight it in court. The courts will have little to say about his complaint with the recall,” the attorney said.

Gilliams believes that Councilman Jim Hill is either the leader of the Political Action Committee (PAC) to recall him, or has something to do with it. We found no evidence that Hill has anything to do with the recall group. In fact, the group was started by Tracey Cole, Christopher Nunn, and Bill Flynn.

“I am not in any way affiliated with nor did I have anything to do with the creation of the recall group. This group started as an organic uprising due to the chaos witnessed on council. I think they are amazing and have done an outstanding job of staying focused on the task,” Hill told Sebastian Daily.

Recently, Gilliams was accused of voter intimidation in his response to the first round of recall petitions, telling everyone to seek legal advice before they sign.

Legal experts told Sebastian Daily they disagree with all his claims and believe Gilliams is once again trying to discredit or cast doubt on the recall effort.

First, there is no time table on when a PAC can be created. Secondly, the recall petition started six months to the day Damien Gilliams, Pamela Parris, and Charles Mauti were sworn in. As for the Florida Statute, it was good enough to the Supervisor of Elections during the 1st phase of the recall.

“The law is we couldn’t turn them in before their six months, and we had thirty days to collect. We could have started at the beginning of May and turned them in after May 20 if we wanted to, but we waited till they served a full six months,” Tracey Cole, the PAC founder for the recall, told Sebastian Daily.

Members who run the recall group say they’ve seen Gilliams’ threats and attacks before and say they will not be intimidated.

“Damien Gilliams is doing what he always does. He comes out with a phony attack whenever he’s trapped. But with all the laws he’s broken, he should be an expert by now,” Sebastian resident Bill Flynn said.

Cole suggests that Sebastian citizens should sue Damien Gilliams for all the lawsuits he’s created, which now the taxpayers may have to pay.

“I think the citizens should sue him for trying to take over our city. Welcome to 2020, the voters rule, not Damien Gilliams. I’ll be glad to escort him out after the recall,” Cole said.

Damien Gilliams, Pamela Parris, and Charles Mauti are still facing a lawsuit filed by a government advocacy group over the Sunshine Law violations. The lawsuit could cost Sebastian taxpayers millions.

Damien Gilliams and Pamela Parris were arrested for criminal charges after violating Sunshine Laws and perjury after lying to the State Attorney’s Office.

Since then, the City Council has asked Florida Gov. Ron DeSantis to intervene and suspend them.

The next Sebastian City Council meeting is scheduled for Wednesday, July 22, 2020 at 6:00 p.m. inside City Hall. The public is invited to attend.