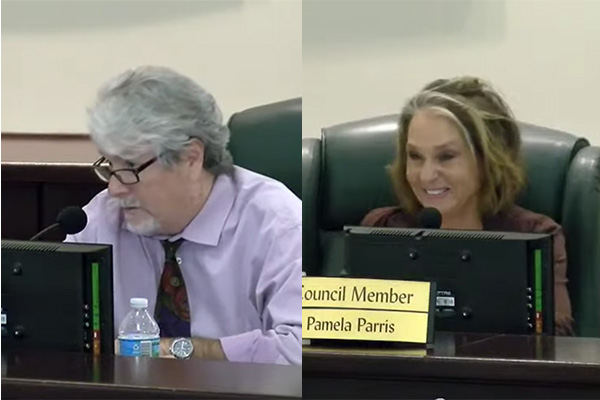 The move comes after Gilliams added items to the special meeting agenda for Wednesday. These items include asking for health insurance for city council members, removing the mayor, terminating the city manager, and publicly rebuking the former Chief of Police.

The special meeting for Wednesday was supposed to be about deciding if the city was going to make face masks mandatory for employees at businesses within the City of Sebastian.

However, at the last minute, Gilliams decided to add his own items on the agenda to resemble what residents called a coup from the April 22nd meeting. The meeting was dubbed “illegal” by investigators with the State Attorney’s Office.

So, Sebastian officials added an item asking the Florida governor to remove Gilliams and Parris. The two council members were arrested on criminal charges for breaking Sunshine Laws and perjury for lying to investigators.

During public outcry in early May, Sebastian citizens asked the council not to remove the mayor or terminate any staff. Obviously, Gilliams ignored the residents of Sebastian and added it to the agenda once again.

“City business is again falling behind because Damien Gilliams and Pamela Parris have their own self-serving agendas that are different than the needs for the people of Sebastian,” a resident told Sebastian Daily.

The PAC Recall group has posted a schedule where people can sign the petitions to have Gilliams and Parris removed from public office.