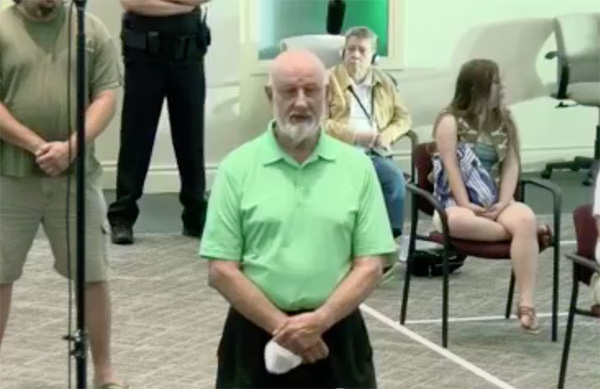 A special City Council meeting was held Thursday evening at City Hall and residents, except for two, expressed their dismay with Council members Damien Gilliams, Charles Mauti, and Pamela Parris.

One thing is for sure; residents asked the Sebastian City Council to leave the city staff alone.

On the agenda was a proposal by Councilman Gilliams to fire City Attorney Manny Anon, limit public input, and other assorted items. There is also a resolution drafted by Gilliams to prevent residents from participating “in-person” for public input. Gilliams believes it is too unsafe for residents to be at the meetings because of COVID-19.

Gilliams didn’t get a chance to talk about his proposal because the meeting ran out of time. His agenda items will now be delayed until the next special meeting on Monday, May 18.

Missing from the dais was Councilwoman Parris, who appeared virtually on Zoom. Residents were curious why Parris showed up for the secret April 22 meeting, but would not show up on Thursday.

“You don’t show up for a meeting tonight, but you show up for an illegal meeting, it shows your character,” Christopher Nunn, one of the founders of the Sebastian Voters Against Gilliams and Parris recall group, said at the meeting.

Residents also voiced their opposition to the secret meeting on April 22 when Gilliams, Mauti, and Parris fired City staff and appointed Gilliams as mayor.

“Mr. Mayor I don’t know Mr. Gilliams. I don’t really care about Mr. Gilliams. I’m an American; I care about democracy. During a global pandemic, the State of Florida was under a State of Emergency. We were advised to stay home. And yet he still has to lock the doors to this Chamber to become Mayor. Is that how he wants to become Mayor? In what world is that ok? In what country is that ok? Not here. I read his BIO before coming over here, and it says it’s all about the People, about Us, not about him. But he locked us out. Well, the doors are unlocked today, the doors are open. In this country, this is what democracy looks like, and he may not like it,” Sebastian resident Woody Talley told the council.

A person who was at the meeting expressed how three city council members disrespected the people of Sebastian on April 22.

“I was there on Wednesday, April 22 when the People’s Candidate and two other council members met clandestinely, without We The People, and held a meeting that had nothing to do with the needs of us, the community. But during the pandemic, it was all about you,” Sebastian resident Elizabeth Betts told the council.

Many residents were disappointed in the meeting agenda, which had nothing to do with the pandemic or COVID-19.

He added that he was offended by an email that Gilliams wrote to City Manager Paul Carlisle calling the public “not educated” and how residents don’t understand.

“The public is not educated and does not understand they can participate through social media. Or one at a time at the Chambers,” the email reads.

“This meeting should not be happening. There’s no emergency issues that need immediate council action. Not one listed on this councilman Gilliams’ spite agenda needs to be heard at this time. Gilliams thought this moment would be the right time at the height of an international pandemic. A health crisis,” resident Michael Frank said at the meeting.

“All these three are doing is creating more tax money for me to have to pay, and some of them can’t even pay their own taxes. I guess with that being said, I would ask that council members Charles Mauti, Pamela Parris, and Damien Gilliams to resign. And I certainly don’t think that now would be the time to overthrow the city,” Judy Barlett said.

Morris also asked the city council to do what they were elected to do and to “give our city the respect it deserves and stop making a mockery of these meetings.”

Morris also addressed some of the agenda items that Gilliams is proposing, such as terminating the City Attorney without cause.

“We should never fire people without cause or because you don’t like them or what they stand for. And we should not limit public input to only residents. There are many business owners and property owners here,” Morris told the council.

The rest of Thursday’s meeting didn’t escape from the typical behavior presented by Gilliams. It was like business as usual with Gilliams at City Hall.

When the meeting was nearing the end, Gilliams realized he would not be able to talk about his agenda and proposals to fire staff or limit public input at the meetings.

While councilman Jim Hill was talking, Gilliams got up from his chair, made noises with a stack of papers, and made other distractions before the meeting ended.

On Thursday, before the meeting, all three council members were served a court summons in a lawsuit for breaking Sunshine Laws. Unfortunately, Sebastian taxpayers may foot the bill.

Many residents who didn’t know about the lawsuit spoke how these three are costing the taxpayer money.

There is a recall group named Sebastian Voters Against Gilliams and Parris, who want to remove all three from office. They are meeting Saturday at 11:00 a.m. at Riverview Park in Sebastian. A petition to begin the recall will start on May 20th.