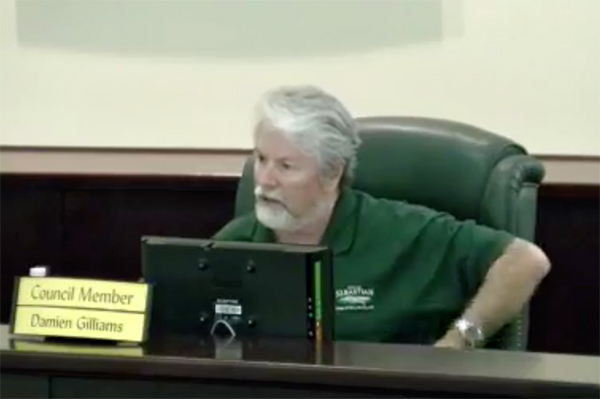 The plaintiffs are Florida Sunshine Law defenders, Michael Barfield and Barbara Petersen, according to court documents.

We reached out to Mayor Ed Dodd for comment about the lawsuit. Dodd says the City of Sebastian was also named as a defendant.

“The new filing is a money case with the City now also on the hook, we have turned it over to our insurance company who will represent the City in the action,” Dodd told Sebastian Daily.

With the City of Sebastian also named as a defendant, that means taxpayers may foot the bill.

The court documents clearly state that Gilliams, Mauti, and Parris broke multiple Sunshine Laws. The complaint reads that after the City Council meeting was canceled on April 22, 2020, the three council members entered City Hall for the purpose of holding a nonpublic meeting.

“After gaining entry to City Hall, the individual defendants took no action to ensure that members of the public were also able to gain entry into the building. Individual Defendants then conducted the nonpublic meeting of the City Council and took action, made motions and voted on a variety of issues, including, but not limited to, suspending emergency declarations, firing the City manager and City Attorney, canceling a utility contract, appointing Defendant Gilliams as Mayor, retaining a new attorney for the City Council, and a hold on a land-use extension,” court documents say.

While the three council members wouldn’t unlock the door for others, they allowed Sebastian Property Owners Association (SPOA) directors Diana Bolton, Bob Stephens, and Bob Bedea inside the Chambers. Gilliams still serves as president of SPOA.

“There was no debate on any of the series of actions and votes taken by the Individual Defendants and all of this activity occurred in less than ten minutes including the pledge of allegiance,” according to the complaint.

A video obtained by Sebastian Daily shows a nonpublic meeting among the three council members and three SPOA directors saying, “Psst. Here comes the police.” At that point, the nonpublic meeting was abruptly adjourned.

“This is an action for declaratory relief against Defendants Gilliams, Mauti, Parris and the City for violations of Florida’s Sunshine Law codified in 286.011, Fla. Stat., and Art. I, 24(b), Fla. Const,” documents read.

The plaintiffs are asking for an award of their attorney’s fees and costs incurred, and any other relief the Court deems just and proper.

“Sad and yet another expense we the tax payer will have to pay for … This is THE definition of costly incompetence,” Sebastian resident Michael Frank told Sebastian Daily.

We will have more information about the lawsuit this weekend.