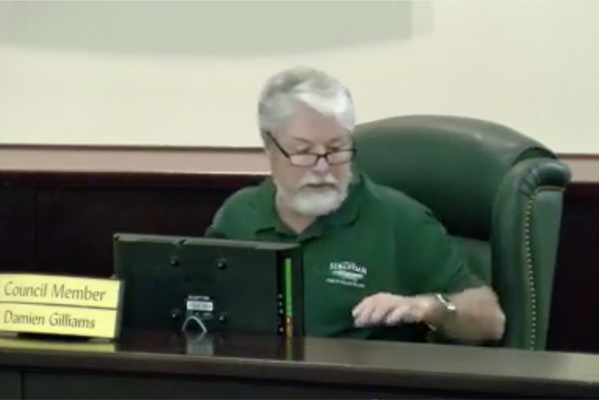 Councilman Damien Gilliams is facing a recall, a lawsuit for breaking the Sunshine Law, and now dismissing the people of Sebastian.

The people have spoken, but Sebastian City Councilman Damien Gilliams is moving forward anyway and looking for Charles Mauti and Pamela Parris to vote on his agenda to fire city staff and put limitations on public input for residents.

Gilliams had already requested another special meeting for Monday, May 18th, but now he also wants one on Tuesday, May 19th.

The trio will attempt a filibuster to do the unthinkable while facing a criminal investigation by the State Attorney’s Office, and a lawsuit for violating the Sunshine Law.

Listed below are the agenda items from Gilliams:

The first item is to end the Mayor’s Local State of Emergency, then approve a new one. The City of Sebastian could lose federal funding by changing it.

Gilliams isn’t telling everyone that with his “resolution to conduct Zoom meetings during COVID-19,” he plans to introduce a resolution from his attorney to keep residents from participating inside the Chambers to provide public input.

He claims it’s too unsafe to practice social distancing at the meetings, but residents say he’s been yelling on a bullhorn to the people at Riverview Park to come to his bar and have a drink at 10:30 a.m.

Gilliams then wants to limit non-residents to address the City Council during regular public input. Many local businesses and property owners feel this is unfair.

And the two final items are about firing City Attorney Manny Anon after residents on Thursday asked the Council to leave the staff alone.

All of these items are another attempt by Damien Gilliams, Charles Mauti, and Pamela Parris to take control of the city, against the people’s will, and to fire city staff to appoint their favorite people and a new set of rules.

Sebastian residents will have to go to more special meetings this week to stop a possible take over of the City of Sebastian.

There is a recall group named Sebastian Voters Against Gilliams and Parris, who want to remove all three from office. They are meeting Saturday at 11:00 a.m. at Riverview Park in Sebastian. A petition to begin the recall will start on May 20th.