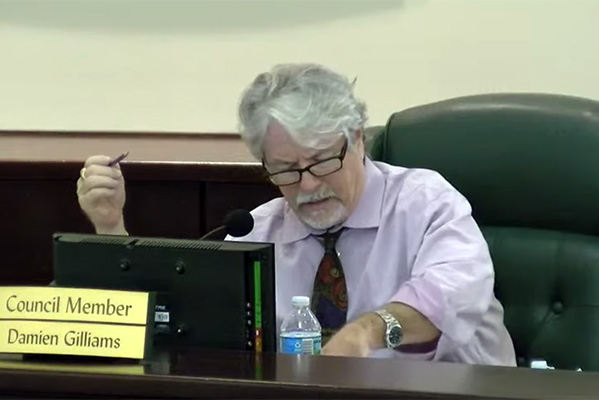 There is a special meeting planned for Wednesday, July 1, 2020, 5:00 p.m. at City Hall, to discuss making it mandatory for employees at businesses to wear masks in Sebastian.

The decision to make masks mandatory comes a few days after Indian River County implemented it in the unincorporated areas.

However, instead of focusing on the coronavirus pandemic for the needs of the people, Councilman Damien Gilliams is now filling up the agenda with his own items.

Some of the agenda items appear to be another coup attempt that made the April 22nd meeting so infamous after Damien Gilliams, Pamela Parris, and Charles Mauti tried to fire the city staff. Then, they appointed Gilliams as Mayor.

“City business is again falling behind because Damien Gilliams and Pamela Parris have their own self-serving agenda that’s different than the needs for the people of Sebastian,” a resident told Sebastian Daily.

Here’s a list of some of the items Gilliams is adding to the agenda:

Sebastian citizens are again disappointed with Gilliams, as they think he’s overstepping a line once again. Many people believe Gilliams is doing this once again because he doesn’t think the public will show up for input since they are focused on the 4th of July weekend.

It was Councilwoman Pamela Parris who wanted Health Insurance. Sebastian residents do not feel that the city council should be receiving entitlements right now during a pandemic. They feel that it’s barely a part-time job. But, Gilliams now wants to bring it back up to vote. Many residents believe Parris is behind this agenda item.

The removal of Ed Dodd as the Sebastian Mayor is a continuous issue with Gilliams since he wants to become Mayor. This topic about the Mayor continues to be brought up, even after Sebastian’s citizens asked the City Council to leave Mayor Ed Dodd alone.

Gilliams will try again to terminate City Manager Paul Carlisle without cause, even after the citizens asked to leave the city staff alone and get back to work. Gilliams continues to threaten the city manager’s job without any valid reason for removal.

The last agenda item by Gilliams is about former Sebastian Police Chief Michelle Morris. During our investigation, we have found that Morris has done nothing to violate the Emergency Declaration. The allegations against her are also invalid.

The PAC Recall group has posted a schedule where people can sign the petition to have Damien Gilliams, Pamela Parris, and Charles Mauti removed from public office.