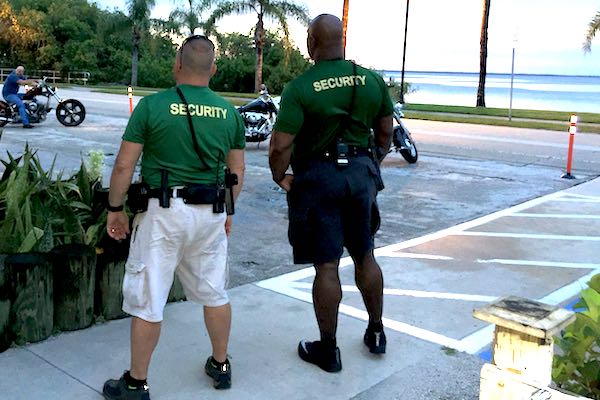 It’s not clear if this move is permanent or temporary, but the Sebastian bar hired a security company with at least two fully armed men on the weekends.

While speaking with one of the security officers, they said motorcycle club colors are banned from the establishment.

It proves that Earl’s is cracking down after recent events of fights and other problems at the bar.

Two weeks ago, three men from the Outlaws motorcycle club were arrested after a fight with injuries, according to surveillance video obtained by Sebastian Police. During the incident, another man allegedly brandished a firearm in the bar area, according to witnesses present at the bar. Police later found the weapon locked in a vehicle.

However, some witnesses who were at the bar area said no one brandished a weapon. And others say the Outlaws had nothing to do with the fighting that went on at Earl’s.

Last month, another man, who works as a local roofing contractor, was arrested after he allegedly punched a woman in the ladies room. The incident was about sharing a pool stick. The man allegedly told the victim he was a “police officer carrying a concealed weapon and was going to contact his police buddies,” according to the report.

Earl’s has always done a great job banning people from the establishment who fight in their bar. They won’t tolerate it. But after the incident involving the Outlaws, they have banned motorcycle clubs with colors.

The move isn’t fair to some because it punishes legitimate clubs that just like to ride motorcycles for fun. Most of these people are locals who are retired or enjoy riding on the weekends.

Earl’s Hideaway is known for its pizza and music. They do have the best live entertainment and the best pizza in Sebastian.

We asked some patrons what they thought about the new security presence.

“It doesn’t bother me. I see it all the time at Captain Hiram’s. Earl’s isn’t for bad bikers, never was,” one customer told Sebastian Daily. Another customer said it didn’t bother her either.

“Some days you just wanna head down the street to a local joint for some beer and decent pizza. That was yesterday for me. Lots of vets from my era and overall good guys. I love having a little time off pretending to be normal,” Guthrie said.