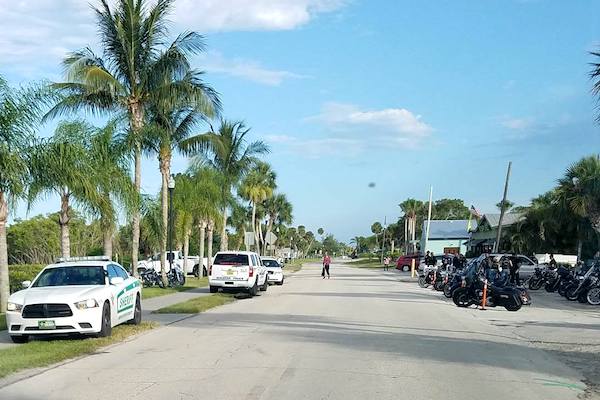 Members of the Outlaws motorcycle gang were in a fight Sunday at Earl's Hideaway in Sebastian. (Photo: Shannon McClain)

SEBASTIAN – Three men from the Outlaws motorcycle club and another man were arrested Sunday at Earl’s Hideaway after the Sebastian Police Department was called about a fight with injuries.

The fight involved several males who were separated just before law enforcement arrived.

Officers made contact with two of the parties involved, they stated that they were in a physical disturbance with all of the members of the Outlaws.

Two men had facial injuries from the incident that occurred near the west side of the sand bar area of Earl’s.

Police made contact with the gang and requested they leave the bar. Officers escorted Jason Bowman out of the bar, according to the report.

Customers informed police that Bowman had a firearm inside the bar establishment, the report stated.

Bowman, 40, of Fort Lauderdale, told police that he had a firearm that was now secured inside his vehicle. Bowman carries a concealed weapons permit, which was verified.

The firearm was a loaded Smith & Wesson handgun with a 9mm magazine.

Since Bowman had the firearm inside the establishment, he was placed under arrest and transported to the Indian River County Jail where he was charged with Felony Violation of Carrying Concealed Weapon Permit.

Daniel Fournier, 39, of Boynton Beach told police that he was not going to exit the bar. As officers tried to detain Fournier, he pulled away and was eventually transported to the jail where he was charged with resisting arrest.

A victim who was battered after being attacked by several members of the motorcycle club said he was punched and positively identified 47-year-old Ray Rodriguez of Coconut Creek as the one who struck him in the face.

The victim had a swollen left eye and had some hemorrhage spots on it. He also had swelling on his forehead, the report said.

Rodriguez was arrested and transported to the Indian River County Jail where he was charged with battery.

Another victim identified 25-year-old John Ryan McMahon Potts of Fort Lauderdale as the person who attacked him during the Outlaws brawl.

Potts was also arrested and charged with battery.