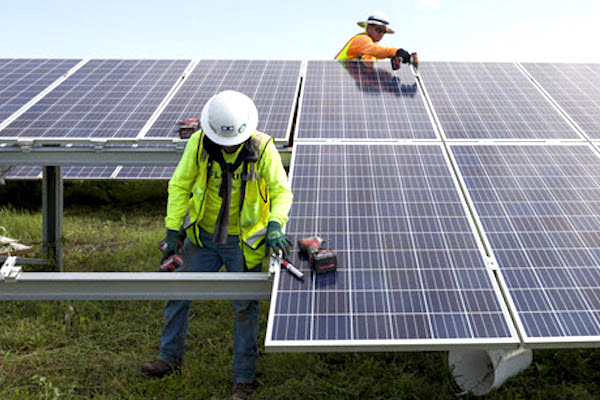 The solar energy center is one of eight being built in Florida. They are built cost-effectively, which means that over their operational lifetime. All eight will save FPL customers $39 million dollars in fuel and other savings.

The savings are also above and beyond what it cost to build the solar plant. Each plant will generate enough electricity using only the sun for fuel to power approximately 15,000 homes.

“FPL is living proof that it’s possible to generate cleaner energy and deliver outstanding service while keeping customers’ electric bills among the lowest in the nation,” said Eric Silagy, FPL’s president and CEO. “We are proud to be advancing affordable clean energy infrastructure in Florida in close partnership with respected environmental advocates, community leaders and our customers. Together, we are bringing the benefits of solar energy to more Floridians faster and more affordably than ever before.”

The Barefoot Bay solar energy center will prevent an estimated 118,000 metric tons of carbon emissions every year – the equivalent of removing approximately 12,000 passenger vehicles from the road.

Universal solar energy centers operate quietly, require no water for operation or maintenance, and solar arrays sit low to the ground and can be buffered from sight by trees and other natural vegetation.

A solar center does not require staff to operate, so it won’t bring more traffic to the area after construction, which is expected to last about six to eight months.

The proposed Barefoot Bay Solar Energy Center is projected to create about 200 jobs during construction, which in turn will provide an economic boost to local businesses.