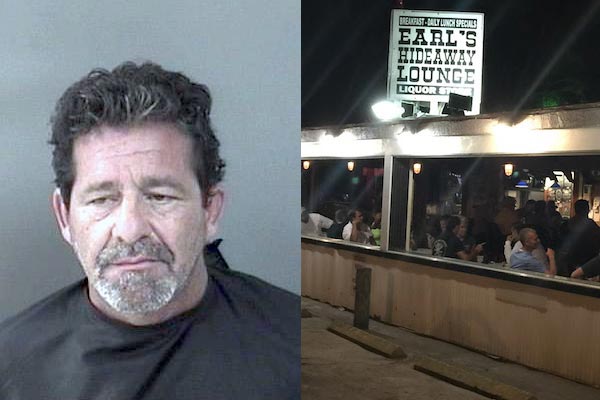 The victim told police that she got into a verbal argument with another woman over a pool stick before the Sebastian man confronted her.

Scozzari, 58, also started yelling at the victim and allegedly said he was a “police officer carrying a concealed weapon and was going to contact his police buddies,” according to the report.

About 20 minutes later, the victim was barricaded in the bathroom by a couple of women, one was allegedly Scozzari’s wife, according to the victim.

The victim then said Joe Scozzari entered the women’s bathroom, walked up to her, and “proceeded to punch her in the face with a closed fist” and then kicked her “multiple times around her body,” the report said.

As she was being kicked, the victim ripped off the defendant’s glasses in order to get him off of her, the reported stated. At that time, other people from the bar came in to help the victim.

Another witness said he heard Joe Scozzari say, “you deserve what you got” to the victim.

Police made contact with Scozzari who said he was looking for his wife in the bathroom because he could not locate her near the bar area.

Scozzari, who works as a roofing contractor, claims that he heard a lot of screaming coming from the bathroom and managed to push the door open.

While inside the bathroom, Scozzari says he noticed a “big girl on top of the victim and he managed” to scoop her off of the victim. He said the victim broke his glasses while he was trying to separate them.

Then Scozzari alleges that another Sebastian man named Joey punched him in the face.

Scozzari was arrested and transported to the Indian River County Jail where he was charged with Battery.