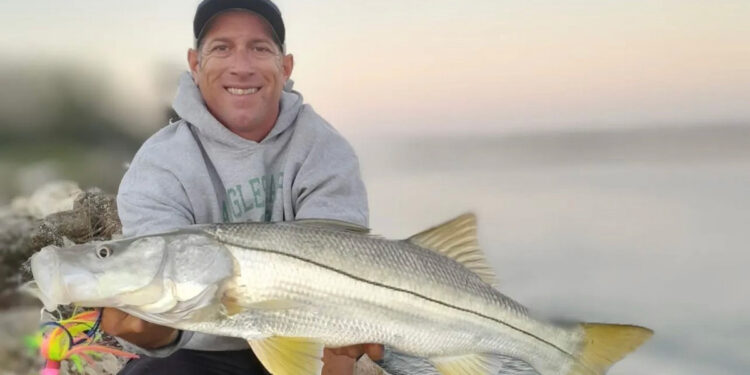 Chris Giuffrida with a snook at Sebastian Inlet

Anglers at the Sebastian Inlet tell Sebastian Daily that snook and pompano are still biting, as well as jacks and blue runners. Specific jigs and live shrimp seem to be the choice for bait.

Snook and sheepshead are found near the rocks on the north side of the inlet, but the North Jetty is still closed. Most of the action appears to be during both tides at the South Jetty and the Catwalks. Some anglers told us they caught flounder, but not much.

Remember, snook are catch-and-release only.

As we said in the previous Sebastian Inlet fishing report, the T-Dock area is popular with pompano. A couple of anglers told us they used sprite spoons to catch them.

The weather will be colder this weekend, with lows in the low 40s and a high near 60 degrees. The warmest day of the week is Thursday, where highs should be near 80 degrees.

Chris Giuffrida was visiting the Sebastian Inlet from Port St. Lucie last weekend when he caught a snook (currently catch-and-release only) using a skittles jig. These jigs are usually custom painted in seven different colors. They are popular for ice fishing, but anglers use them for all game fish species.

He used a PENN Battle 3, one of the most popular reels sold on the market today, becoming the third iteration of the Battle. It’s fitted with CNC Gear™ Technology, HT-100™ Carbon Fiber Drag System, and a full metal body. In addition, the reel comes in sizes ranging from 1000 to 10000 and provides more durability.

Adam Ross (IG: adam_ross_boss), from Brevard County, caught a 40.25″ Black Drum in the St. Sebastian River using live hand-picked shrimp as bait. He used a Star Rods as a rod and a Shimano Spinning Reel. Anglers like the Shimano because of its lightweight, rear-drag spinning reel features.

Black drum fishes are usually caught inshore in the Indian River Lagoon or the St. Sebastian River. It is common for these fish to take both live and dead bait, making them popular with anglers, including fly fishermen.

The Black drum are edible, with a moderate flavor, and are not oily. Some restaurants in Florida serve smaller black drum. The Big drum can be challenging to clean because of its large scales.

The north side of the Sebastian Inlet is now open for fishing, but the jetty is still closed off due to storm damage. The district has worked closely with Sebastian Inlet State Park to repair the damage as quickly as possible.

“The apron along the north side of the inlet had been closed since early November, when Hurricane Nicole whipped up waves that undermined the area, causing dangerous sinkholes,” a spokesperson for the Sebastian Inlet District told Sebastian Daily.

The state park, responsible for pedestrian access at the north jetty, will announce when the jetty has reopened. Sebastian Daily will also share that information when it’s available.

Also, county beaches are closed from two back-to-back storm events in Sebastian, and staff is managing around multiple constraints.

Sea Turtles are federally listed as threatened and endangered, and nesting season begins on March 1st. Therefore, any restoration efforts must be planned and executed before or after the nesting season.