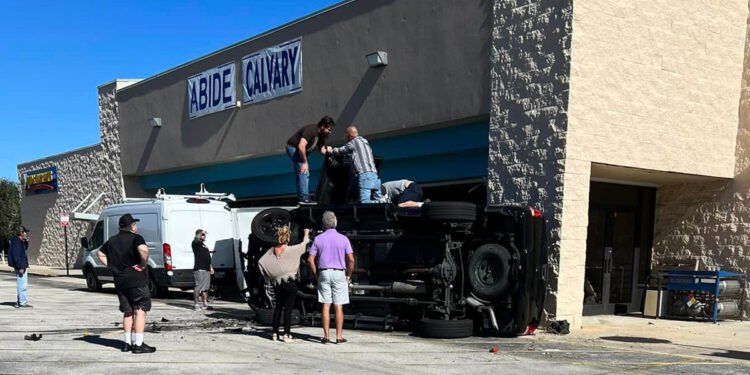 A pickup truck collided with two other vehicles before crashing into the entrance of Abide Calvary Church in Sebastian, Florida. EMS transported two people to Holmes Regional Medical Center.

The crash occurred Saturday at approximately 11 a.m. at 11640 U.S. Highway 1, between NAPA Auto and the Hen House Eatery.

According to the Indian River County Sheriff’s Office, the driver of a black Ram pickup truck entered the parking lot from the Country Ham ‘n’ Egg restaurant and “lost consciousness due to coughing erratically.”

A witness stated the Ram pickup hit a tree, continued and hit a parked trailer, and then hit a parked Toyota Tundra. Then, it continued to travel and crashed into a trailer that a white Ford Transit was pulling. Lastly, the pickup flipped on its side before crashing into the Church.

“Abide Calvary continues to pray for the men involved in the accident. We ask that the community of Sebastian do the same. Buildings can be repaired, and material items can be replaced. Life matters. Please pray for them,” Lead Pastor Ryan Davis told Sebastian Daily.

The 62-year-old driver sustained fractured ribs and lacerations on his face, and the passenger, 61, suffered a broken arm and multiple bruises. There were no other people injured in the crash.

The driver of the Toyota Tundra was inside a restaurant when the crash occurred. The truck had heavy damage to a left taillight and extensive damage underneath from the accident.

The driver of the Ford Transit sustained no injuries, but the trailer he was pulling was torn apart by the Ram pickup.

North Side of Sebastian Inlet Now Open for Fishing