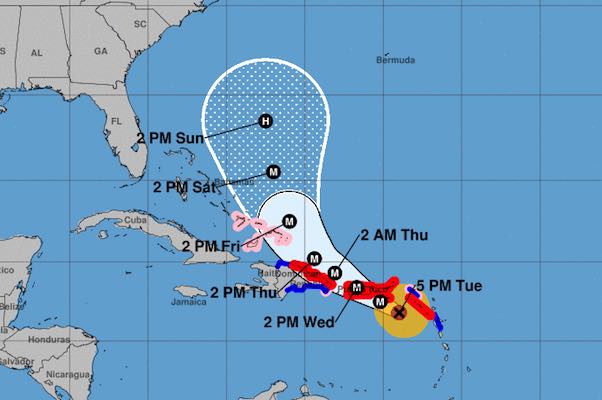 Hurricane Maria odels continue to shift away from Sebastian and Vero Beach in Florida, but the storm will cross Puerto Rico on Wednesday. (Photo: NOAA)

SEBASTIAN – Hurricane Maria has continued to gain strength as it nears Puerto Rico as a Category 5 storm, according to the National Hurricane Center.

Hurricane Maria is potentially a catastrophic hurricane as it passes near the U.S. Virgin Islands tonight and over Puerto Rico on Wednesday. Maria has maximum sustained winds of 165 mph.

Florida residents in Sebastian and Vero Beach are watching Hurricane Maria closely as it NOAA’s cone of uncertainty projects the storm offshore.

Puerto Rico residents were told to “evacuate or die” in an early announcement by officials at 3:00 p.m. today.

“Maria’s core is expected to move near or over St. Croix and Puerto Rico tonight and Wednesday, bringing life-threatening wind, storm surge, and rainfall impacts to portions of those islands,” the National Hurricane Center said in a statement.

A hurricane warning is also in effect for the remainder of the Virgin Islands and the northern coast of the Dominican Republic, where Maria is expected to bring dangerous wind, storm surge, and heavy rainfall.

Hurricane Maria is no threat to the City of Sebastian or City of Vero Beach at this time. The concern now is where the storm will make landfall north of Florida.