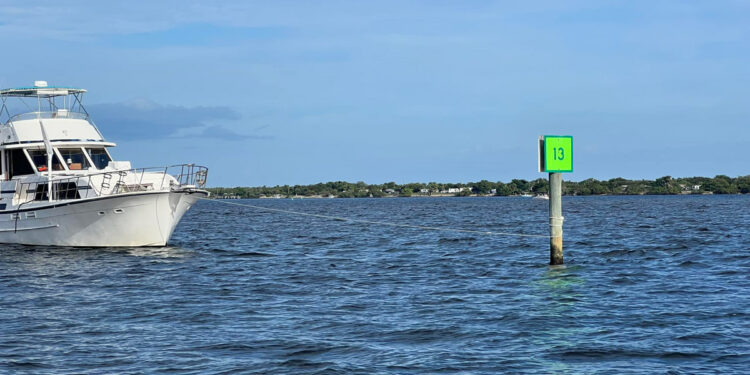 Last Friday, a boat tied to a Sebastian Inlet marker 13 next to the sandbar seemed suspicious and illegal, which caught the attention of many Sebastian residents.

Scott Thiel, a Licensed Real Estate Broker at Living Coastal Florida Real Estate in Sebastian, was one of the first to discover the boat tied to the channel marker.

Thiel posted a picture of the vessel on his Facebook page and reminded boaters that it was illegal to tie up to a day marker or channel buoy. But then he soon learned that there was more to the story.

Over the weekend, we discovered that the U.S. Coast Guard and the Indian River County Sheriff’s Office were involved in the investigation. Soon after, the Border Patrol got involved because they believed refugees were aboard. There were no refugees on the vessel when it was tied to the channel marker.

The boat was stolen from Marsh Harbour, a town in the eastern part of the Bahamas near Abaco Beach.

Several agencies are still investigating, but some say there’s been a spike in refugees fleeing Cuba and landing in various parts of Florida.

The vessel has since been moved and anchored near Squid Lips.

Sebastian Daily will report any new information once it becomes available.