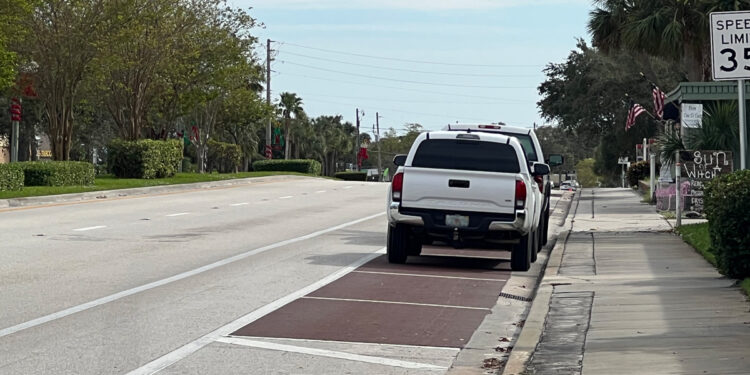 Last week, the Sebastian City Council voted 4-1 on a $460,000 resolution to restore all the red brick pattern parking spaces on both sides of U.S. Highway 1 from Davis Street to Harrison Street.

The Florida Department of Transportation is reconstructing U.S. Highway 1 in 2023 to include bicycle lanes and to redo the sidewalks. As a result, they are tearing up all the current parking spaces, including those with the red brick pattern.

It’s not the city’s fault for spending the money to replace the parking spaces, but it is FDOT’s roadway, and they don’t intend to fix it after their project is complete. The city initially had $358,000 budgeted for the project, but the resolution that was passed is for $460,000.

Davis Street is near the Tire Kingdom store, and Harrison Street is on the south side of Riverview Park.

Following the vote from last Monday, many citizens questioned the amount of money spent and if the city needs pattern parking spaces amid times of higher inflation and market uncertainty.

Vice-Mayor Chris Nunn motioned to approve the spending, seconded by Mayor Fred Jones. Council members Ed Dodd and Bob McPartlan weren’t happy with the price or the negotiations on cost but ultimately voted to approve. Councilwoman Kelly Dixon voted against the resolution.

Dixon was the only council member who didn’t speak during the discussion prior to the vote, so we reached out to her for comment.

She didn’t feel the city had enough trust in the contract language to move forward, leaving her with more questions than definitive answers. Dixon wasn’t in favor of entering a contract simply trusting a government organization at its word and said the city is at risk of being forced to maintain parts of the project if a private contractor is hired for the work.

“Maintenance will cost the city more money. It is my understanding that re-adding the paver/bricks at this time does prevent inconveniencing the citizens more than once, but if we are having to replace this every time the road is re-surfaced, another question I have is it worth the cost? I just did not feel good in giving it a go,” Dixon told Sebastian Daily.

Around the city, many citizens suggested the approved resolution is another example of irresponsible spending and would rather see those monies go toward more road repairs in various neighborhoods, the stormwater, or other projects.

But others say the red brick pattern in the parking spaces compliments the city’s charm and it’s good for tourism.

There are still potential discussions between city officials and the Florida Department of Transportation. Still, either way, the city will have to pay to reconstruct the parking spaces with the pattern design.

One of Sebastian's landmark bars is for sale at the price of $7.2 million