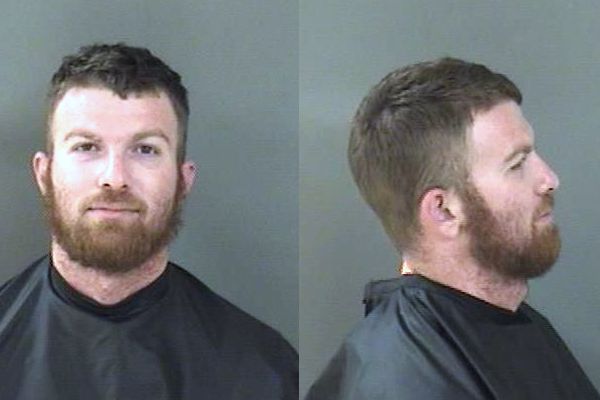 A 31-year-old man loaded a firearm next to a motorist in Vero Beach, then flashed his headlights at them. (Photo: Indian River County Sheriff's Office)

VERO BEACH – A 31-year-old Vero Beach man was arrested after he allegedly loaded a firearm next to a vehicle and then flashed his headlights for them to pull over.

The Indian River County Sheriff’s Office received a report early Sunday morning from witnesses who reported the incident and provided a vehicle description and tag number.

Deputies observed the vehicle, a gray Cadillac, traveling northbound on 34th Avenue and conducted a traffic stop in Vero Beach.

The driver, John Howard Schultz, immediately exited the vehicle once deputies conducted the traffic stop. As a deputy made initial contact with Schultz, he said he wasn’t going to identify himself. He then “turned to walk back toward his vehicle,” according to the report.

Deputies learned that Schultz didn’t have a valid driver’s license. It was revoked in 2016 for failure to submit a breath test.

Another deputy observed a firearm magazine laying next to the driver’s seat in plain view. A search of the vehicle located a 40 caliber Smith and Wesson semi-automatic pistol located in the center console.

The weapon had a fully loaded magazine and a round in the chamber.

A witness said while driving in Vero Beach they saw Schultz load a black pistol and then “flash his lights at them,” the report said.

All witnesses identified Schultz as the suspect who brandished a firearm.

Schultz was arrested and transported to the Indian River County Jail where he was charged with felony aggravated assault with a deadly weapon, and driving on a suspended driver’s license.