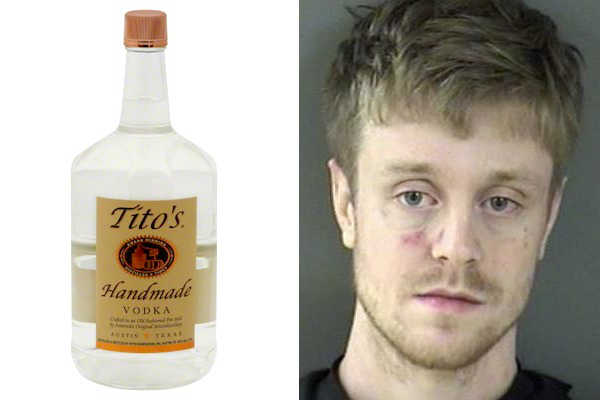 SEBASTIAN – The manager at the Winn-Dixie in Sebastian called the police to say he was chasing a man on foot who left his store with a bottle of Vodka.

The Sebastian Police Department found the manager and the suspect at the intersection of Bevan Drive and Tulip Drive.

Evan Dale Woodruff, 24, was seen with a bottle of Tito’s and ignoring commands from officers to stop.

As officers attempted to take Woodruff into custody, he would not let go of the bottle. Woodruff resisted and continued to hang onto the Vodka bottle.

Another officer arrived, and Woodruff was detained.

The Winn-Dixie manager said that Woodruff was seen walking out of the store without paying for the merchandise.

The manager made contact with Woodruff to try and resolve the situation without calling law enforcement, but he walked away, according to the report.

Store surveillance shows Woodruff taking the liquor bottle and walking out of the store.

Woodruff told police “I messed up” during questioning, the report said. He also appeared to be under the influence of alcohol.

Woodruff was arrested for retail theft and transported to the Indian River County Jail.