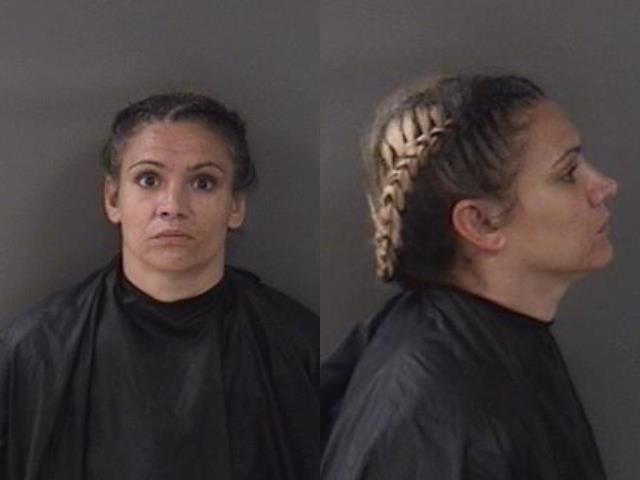 A Barefoot Bay woman was arrested after she walked out with $655 worth of merchandise from the Home Depot in Sebastian.

Stephanie Lee Ann Hanscome, 39, was seen inside the store Friday by a loss prevention employee putting items in her cart and walking out of the store without paying for the merchandise, the affidavit said.

The Home Depot employee following Hanscome into the parking lot and called out to her, but “she ignored him several times.” She pushed the shopping cart to a vehicle occupied by a male driver and a male passenger.

“She opened the passenger rear door and began to put all the items into the backseat of the vehicle. Due to her ignoring his demands to return the merchandise, [the store employee] then advised the male driver that if she gave everything back, he would not press charges against him. The driver then yelled at the female, ‘give it back, I’m not going to get in trouble for you.’ The female then began to remove all the items from the backseat,” the deputy said.

Hanscome put all the merchandise back into the cart, and then she left in the vehicle. The Home Depot employee took pictures of everyone in the car and the license plate.

A few days later, a live warrant was issued by the Indian River County Sheriff’s Office.

Since Hanscome lives in Barefoot Bay, the Brevard County Sheriff’s Office was asked to contact the vehicle’s registered owner to locate the female suspect.

Deputies spoke with the car’s owner, who resides in the 800 block of Juniper Drive in Barefoot Bay. However, the owner was less than cooperative and provided deputies with a different name of the female suspect.

On Friday, April 29, 2022, Hanscome was picked up for the warrant and transported to the Indian River County Jail. She is still being held on a $5,000 bond.

Hanscome was also arrested three weeks ago when an employee found her using fentanyl in a Publix restroom. She was out on bond.

Body Found in Freezer After Welfare Check in Sebastian