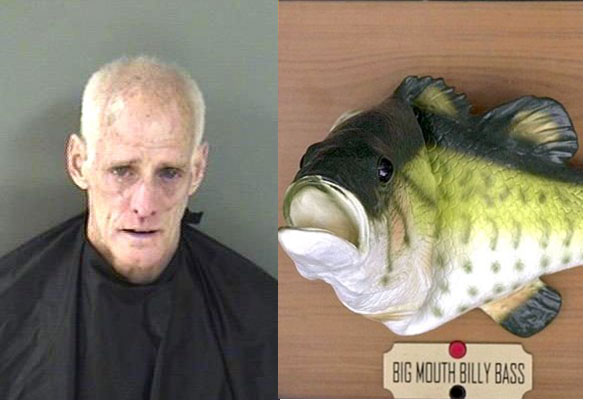 Sebastian man becomes angry when he finds his Billy the Bass singing fish in trash.

SEBASTIAN – One man was arrested Sunday on a charge of battery domestic violence after throwing a “Billy the Bass” singing fish at another individual, according to the Sebastian Police Department.

Gregory Carney, 54, said he was angry with his friend Larry for throwing his Billy the Bass singing fish in the trash, the report said.

Larry told police that the two were arguing on and off all day. He said Gregory went into the den and started to play with a Billy the Bass singing fish to annoy him, according to the arrest affidavit.

“He stated Gregory continued doing this just to aggravate him,” the officer said.

When Gregory left the room, Larry placed the fish in the trash. A few minutes later, Gregory wanted to know where his fish was, police said.

When Larry told him it was in the trash, Gregory retrieved it and threw it across the room, striking him in the head “near his hairline,” according to the report.

Gregory was arrested and transported to the Indian River County Jail.