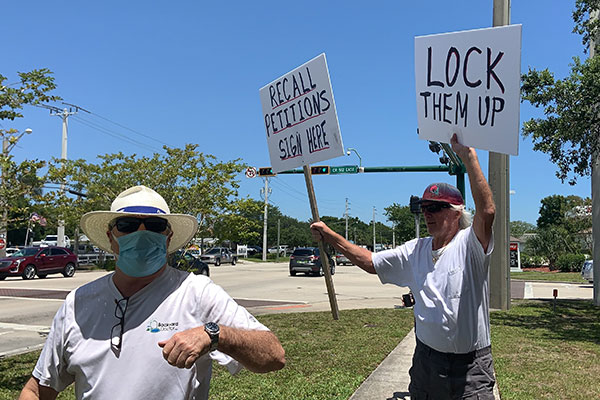 Leslie Swan, Indian River County Supervisor of Elections, has officially received the recall petitions from the City of Sebastian. The petitions will go through the verification process.

Once the petitions are certified, the three council members will have five days to resign. If they do not, a judge will set a date for a special election to have them recalled.

The big question is when the special election will be held. It could be in September, October, or during the regular election on November 3, 2020.

“We are good with the election being November 3, or sooner. We just want the recall process completed properly,” Tracey Cole, leader of the PAC group to recall the city council members, told Sebastian Daily.

All through the recall, Damien Gilliams was accused of harassing the recall group at Riverview Park in Sebastian. There were days he used a bullhorn to yell from his bar across the street, in an attempt to disrupt the signing. There were other times he showed up in person, demanding to see permits, or telling the group they will be fined $500 for each recall sign. He is also accused of creating fake social media accounts on Facebook to harass recall members. Citizens are accusing Gilliams of voter intimidation.

Last month, Gilliams told people during a city council meeting that the recall group did not come up with enough numbers to move forward with the recall, and said that was the reason they depended on Governor Ron DeSantis to remove him.

Gilliams, Parris, and Mauti were elected in November after the three of them ran together on a platform to overturn the annexation. But now citizens believe they were misinformed about the annexation by the three council members.

Sebastian Daily will have more information about the City voting not to appeal the annexation later this week.

Damien Gilliams is still facing three counts of criminal charges for violating Sunshine Laws, plus one count of perjury after lying to the State Attorney’s Office.

Pamela Parris is still facing one criminal charge of violating the Sunshine Law, plus one count of perjury after she lied to the State Attorney’s Office. Recently, Parris was charged again, this time for a civil charge for breaking the Sunshine Law.

Charles Mauti cooperated with the State Attorney’s Office but was charged again last week for violating the Sunshine Law with Pamela Parris.