Bones Found in Vacant Field Near U.S. 1 in Sebastian 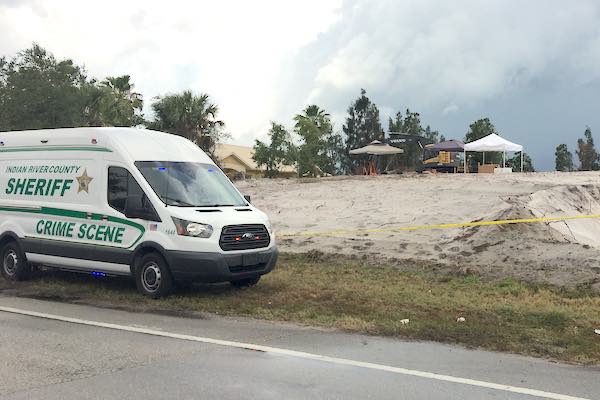 SEBASTIAN – On Sunday, April 22 at about 6 p.m., a person was using a metal detector found bone fragments in a vacant lot along U.S. 1 at the north city limits of Sebastian.

The bone fragments have been determined by the Medical Examiner’s Office to be that of a human. The location is adjacent and to the north of the City of Sebastian Cemetery. The person who found the bones drove to the Sebastian Police station and reported the discovery.

Patrol officers responded to the scene and secured it immediately. Detectives and crime scene personnel arrived and examined the bone fragments and performed a cursory examination of the area. The bones and material do not appear to be fresh and have likely been there for some time. The property belongs to the City of Sebastian and is under construction for expanding the cemetery grounds. A contractor had been working the site until the discovery, removing dirt and preparing the location.

An officer was posted on site through the night. On Monday morning detectives, along with crime scene personnel from both the Sebastian Police Department and Indian River Sheriff’s Office, began conducting a comprehensive search after the bones were examined by the ME’s office and determined to be human.

“At this time, we do not have any idea whether the bones are very old, or recent, or a manner of death,” said Chief Michelle Morris. “It will likely take some time before we have any details on what we have. It is not likely that the remains are from the cemetery based on the location of the discovery, even though it is adjacent to the cemetery.”

Anyone with information on the identity of this subject is asked to contact Detective Todd Finnegan at 772-589-5233 ext 8521 or call Treasure Coast Crime Stoppers at (800) 273-8477. You can receive cash for crime tips and remain completely anonymous.