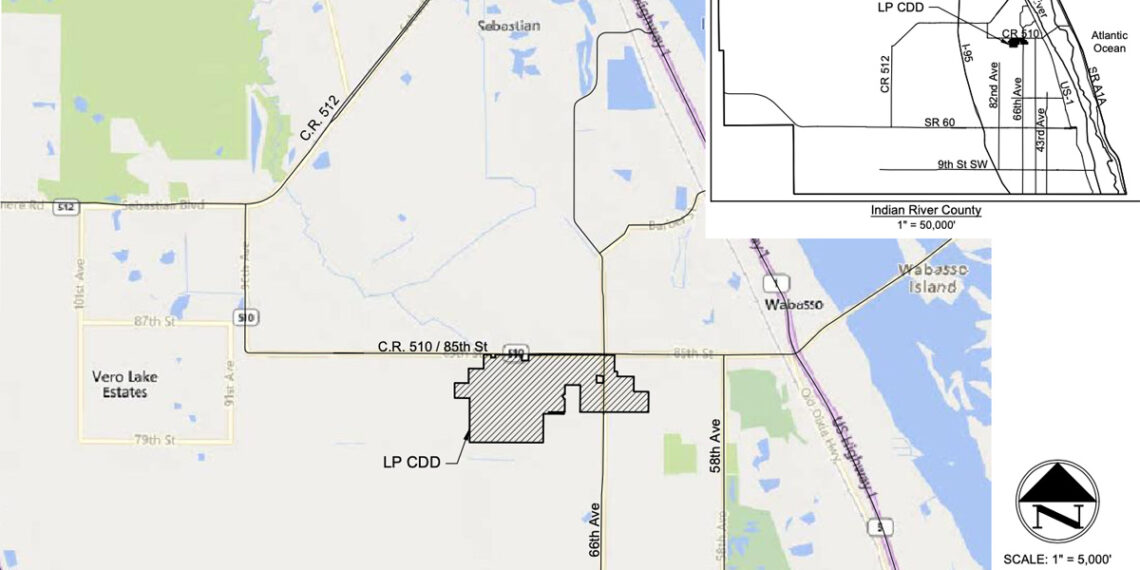 Liberty Park could soon become a Community Development District (CDD) as a special-purpose government if approved by the Indian River County Board of County Commissioners.

The property, located on the south side of CR-510, where it intersects with 66th, is a 502-acre development with a plan to have 980 residential units.

A concerned citizen’s email to a Sebastian City Councilman is causing some residents to question the lack of transparency about the project as it sits near their border.

During the meeting, Councilman Chris Nunn said he received the email about the project becoming a CDD. Nunn stated he was shocked to learn these details, considering that the Sebastian annexation has been fully transparent to the county and other municipalities, and he was hoping for the same respect from the county.

“So, it’s not like a normal HOA where you just have an HOA running a development. It’s actually a local government, a voting, legal authority in the State of Florida,” said Nunn. “I find it interesting that I didn’t hear anything about this until I got an email from a citizen.”

Nunn said the city planners, community development, and the city manager didn’t know anything about the proposed CDD.

“Not one of them heard anything about a CDD at our backdoor. Kind of interesting. I went to a meeting about CDDs a month or so ago and didn’t know the county had moved forward with those happenings.”

County Attorney Dylan Reingold told Sebastian Daily he did not realize the City of Sebastian would have concerns with the proposed CDD and did not believe it would impact the city. He said a public hearing is scheduled for Sept. 13 before the Board of County Commissioners.

“Late last year, the county received an application for the first CDD in Indian River County, which was eventually withdrawn.”

The withdrawn application led to the creation of guidelines for considering future CDDs in Indian River County, which the Board of County Commissioners adopted in June. The guidelines require a minimum of 500 acres, and the property must be consistent with the existing Traditional Neighborhood Development (TND) standards.

Liberty Park was approved as a TND on Oct. 14, 2008. In addition, we obtained the new Liberty Park CDD petition by LP Community Development District dated June 23, 2022, showing that the project has met all requirements.

Reingold believes the county has been transparent on the Liberty Park issue. The Sept. 13 hearing was indicated on the Aug. 16 Board agenda.

“The notice of the public hearing was also posted on our website in advance of the Aug. 16 meeting. And at the Aug. 16 meeting, I publicly announced the hearing that would occur on Sept. 13. All of these measures were taken in addition to the statutory required notices that the applicant is running in the newspaper,” Reingold said.

What is a Community Development District (CDD)?

Reingold told Sebastian Daily that a CDD’s primary purpose is to plan, finance, construct, operate and maintain infrastructure and services in development.

The financing for the infrastructure and services is through the issuance of tax-exempt bonds, with the principal and interest then paid back over time by the residents through assessments on the annual property tax bill.

According to the Community Development District website, a CDD is governed by its Board of Supervisors, elected initially by the landowners, then begins transitioning to residents to serve after six years of operation. Similar to a municipality, the Supervisor of Elections oversees the vote.

The site plan for Liberty Park shows 980 residential units on 502 acres in Indian River County. Near the property is the Liberty Magnet Elementary School. The project was abandoned in 2008 due to the real estate downturn.

The community will surround the school site and town center, providing major walkable destinations. A community clubhouse and amenity site provide another important social center and destination. Numerous parks are provided throughout the community, creating a center for each village.