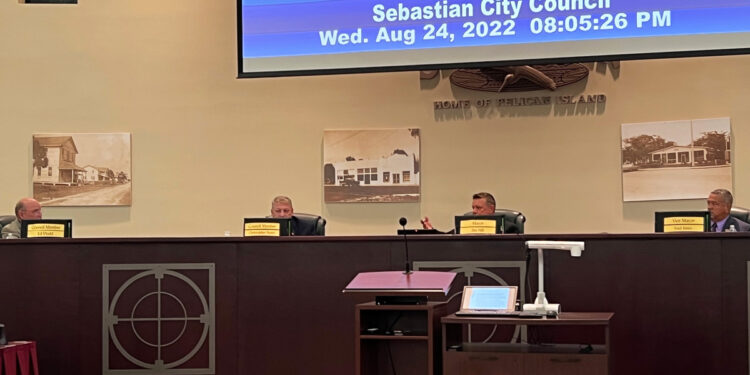 City Attorney Manny Anon told the city council Wednesday that he and City Manager Paul Carlisle met with the attorneys last week and will meet again on Friday to discuss more as they move forward with the annexation.

Also at the city council meeting were Indian River County Administrator Jason Brown and attorney Dylan Reingold. Talks between the city and the county have greatly improved since the previous annexation attempt in 2019.

“County staff has had positive meetings with City staff and the property owner during the process.  The process discussed by the City Council last night should help the City develop a high quality annexation agreement for the benefit of the community.  We believe that continued collaboration between the City and County will help us arrive at a result that will be best for the residents of Sebastian and the County overall.  County staff appreciates the opportunity to provide input in the process,” County Administrator Jason E. Brown told Sebastian Daily.

Councilman Ed Dodd thinks it was essential for the city to bring in a land use attorney to assist them during the annexation process.

“It is something that we should’ve done probably during the last time (2019), and it’s a good move on the part of the city to do this. So, we now have an expert that is advising us on the things we need to do,” Dodd said.

Dodd also feels the city should slow down the Sebastian annexation process to give the new attorney more time to work on a draft of the annexation agreement before moving forward.

Dodd said it’s essential to gather all input from the county and other agencies so they can plan for infrastructure and to meet their concerns in the first draft of the annexation agreement before moving forward. He feels there are legitimate concerns to address.

While Dodd believes that the voluntary annexation is between the City of Sebastian and the Graves Brothers, he wants to ensure they have done everything to try and satisfy the county administration and the public’s needs before they approve it.

“I want to see this annexation go through. I don’t want to do anything to stop it from going through,” Dodd told the council.

Dodd feels they might never be able to meet or satisfy all the demands of the environmental non-profit organizations. But he didn’t rule out collecting their concerns for the annexation agreement.

However, Mayor Jim Hill disagreed with slowing down the process because the city had already delayed it by having two public workshops. He believes they can still collect input for the annexation agreement while moving forward with the statutory requirements.

The mayor stated that the annexation is almost four years in the making, and any “blather” they heard in 2019 from the same people opposing the annexation will once again repeat regardless if they do it in November, December, or January.

Hill made it clear that they have been entirely transparent throughout the process.

Hill understands Dodd’s concerns but still believes there’s plenty of time to meet all the requirements and input during the current process.

For example, the council appointed Carlisle to communicate with county representatives, as he has done. Carlisle is still speaking with the county so they, too, can plan for infrastructure and utilities such as water & sewer.

“All we’re talking about is annexing this land into the city. The land use stuff comes later,” Hill said.

Councilman Chris Nunn agrees with Dodd on almost all of these points. However, he doesn’t want the council to slow down the process out of fear.

“The people who are going to be angry about this are the same groups that are going to tell the lies that we should slow down so they’ll be happy. They’ll never be happy,” Nunn said.

Nunn feels that the county and the city are having the needed discussions with the planners.

“Do I think we need to slow down? I do not because we’re not in a race to get there. Telling us to slow down is like assuming that we’re trying to rush through this. We’re just following the proper procedures. We are covering ourselves,” Nunn said.

Nunn believes they are already doing the right things at every step of the annexation process, like hiring a land use attorney. He suggests that the city keeps moving forward until completion.

Councilman Bob McPartlan agrees with Dodd but disagrees about the annexation being the same in 2019 because it involves more land.

“I think it’s just best management to tap the brakes a little bit and go. I don’t understand what the rush is,” McPartlin said.

McPartlan said this annexation increases the size of Sebastian by about 20%, and as a result, he doesn’t think there’s a problem with taking their time.

Another update about the annexation is scheduled for the next city council meeting on Tuesday, Sept. 13, 2022.

Overall, the county appears very optimistic about the annexation in Sebastian but is requesting input on the annexation agreement to understand how many homes need sewer & water on the Graves Brother’s property.

According to Carlisle, the city could build 10 units per acre, but that won’t be the case since the annexation requires 50% greenspace, commercial development, and parks & recreation facilities. These measures will significantly reduce the number of homes per acre.

“The County understands from City staff that there is a 50% green space requirement in the Sebastian land development regulations (LDR’s), which is definitely positive and in line with the County’s LDRs.  We do have some additional items that we would like to see included in the annexation agreement between the City and Mr. Bass.  We will send them to the City in writing per the request of Council Member Dodd last night.  County staff is working to get the comments completed and submitted to the City soon so as not to delay the process.  Most of our proposed items will help the County plan for and prepare to provide services to the area to be annexed.  Others will be suggestions that the County would like to see, much like our response to the question posed to City residents of what types of things they would like to see in the annexation workshops held earlier,” Brown told Sebastian Daily.

Over the years, the city has annexed property to expand. So chances are, almost every homeowner lives on property that was previously annexed with the Graves Brothers.

Hill and other council members said the annexation will help the city with sustainability for economic growth and affordable housing for families, which is needed more than ever.