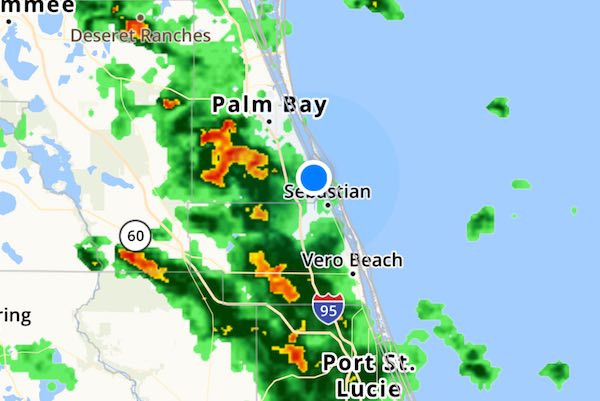 Sebastian, Fellsmere, and Vero Beach will have more rain this week.

SEBASTIAN – Residents in Sebastian, Fellsmere, and Vero Beach woke to the sound of rain Monday as showers and thunderstorms rolled in about 5 a.m.

The good news is, the chance of rain is dropping each day until Wednesday and Thursday. We say that because there’s another chance of thunderstorms later in the week.

Expect a lot of rain today and a possible thunderstorm by 2 p.m. when a new cluster of storms enter Indian River County. The high will be near 80 degrees. Winds are east-southeast at 10 to 15 mph, with gusts as high as 20 mph.

“New rainfall amounts between a tenth and quarter of an inch, except higher amounts possible in thunderstorms,” the National Weather Service told Sebastian Daily.

The rain chance drops for Monday night with a low near 72 degrees.

Tuesday has a 40 percent chance of showers and thunderstorms. Mostly cloudy, with a high near 82. East southeast wind 10 to 15 mph, with gusts as high as 20 mph.

There’s a chance of showers and thunderstorms before midnight on Tuesday, then a slight chance of showers. Mostly cloudy, with a low around 70. East southeast wind 5 to 10 mph. Chance of precipitation is 30%.

Wednesday is too early yet, but we can either expect rain on and off through the day and evening, or no rain at all. We’ll update the forecast later in the week.

Wednesday’s high will be near 84 degrees, and the low will be around 71 degrees.

Vero Beach Man Dances With Himself During Noise Complaint

Man challenges everyone to a fight at Chili's in Vero Beach