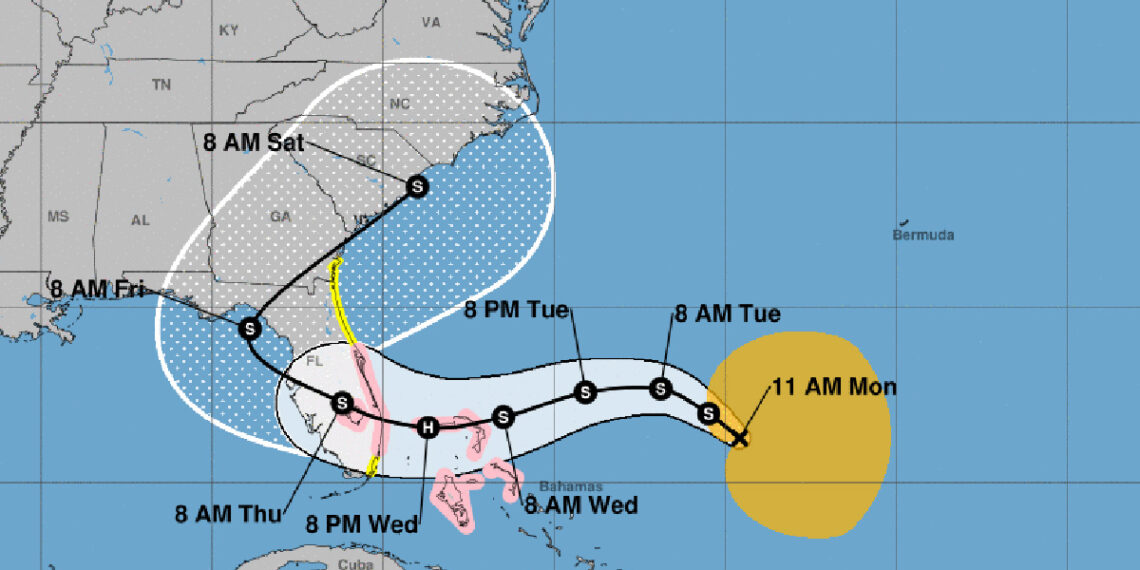 A Hurricane Watch has been issued for the east coast of Florida from Brevard County to Hollandale Beach, including our local area of coverage of Sebastian, Roseland, Barefoot Bay, Micco, Fellsmere, and Vero Beach.

“A Hurricane Watch means that hurricane conditions are possible within the watch area. A watch is typically issued 48 hours before the anticipated first occurrence of tropical storm-force winds, conditions that make outside preparations difficult or dangerous,” the National Hurricane Center said in a statement.

Area residents should monitor the progress of Nicole. A storm surge watch has been issued from Georgia to Florida’s east coast.

As of 10:00 a.m., Subtropical Storm Nicole was located 490 miles of the northwestern Bahamas and moving at 9 mph with maximum sustained winds of 45 mph.

Hurricane conditions are possible within the watch area in Florida by Wednesday night, with tropical storm conditions possible by Tuesday night.

A dangerous storm surge and the tide could cause water levels to rise 3 to 5 feet along Florida’s coast. Nicole could produce rain fall amounts of 2 to 4 inches in Sebastian.

Nicole formed overnight and is expected to make landfall early Thursday on the east coast of Florida, bringing high winds and rain to Sebastian and Vero Beach.

According to the National Hurricane Center (NHC), Nicole could be near hurricane strength as it moves near the Bahamas and the east coast of Florida. Therefore, a tropical storm watch is now in effect for the northwestern Bahamas, and watches are expected to be posted for Florida later today.

“The NHC intensity forecast brings Nicole close to hurricane strength in 60-72 hours while it moves near the northwestern Bahamas and approaches the east coast of Florida, which is in line with the HCCA consensus aid. It’s not out of the question for Nicole to reach hurricane strength, especially given how warm the waters are in the vicinity of the Bahamas. It should be stressed, however, that no matter Nicole’s ultimate intensity, the storm’s large size will likely cause significant wind, storm surge, and rainfall impacts over a large portion of the northwestern Bahamas, Florida, and the southeastern coast of the United States during much of the upcoming week,” National Hurricane Center said in a statement.

Winds of 40 mph or greater extend outward up to 275 miles to the east of the center.

Sebastian Daily will continue to update you about Nicole as more information is available.

Typically, we tend to see subtropical systems develop in the cooler parts of the Atlantic Ocean or the late part of the Hurricane Season. Tropical storms have a higher potential to grow into hurricanes faster than subtropical.