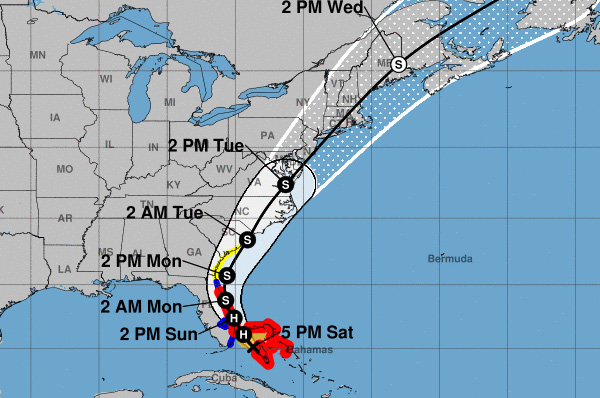 Hurricane Isaias has weakened to a tropical storm, but forecasters say it will re-strengthen to Category 1. The storm is moving northwest at 12 mph with maximum sustained winds of 70 mph.

Isaias is 115 miles from Fort Lauderdale. A hurricane warning is in effect for Indian River County and Brevard County.

“The new NHC track forecast was nudged slightly closer to the Florida east-central coast through 24 hours, with no significant changes made to the previous forecast after 36 hours,” the National Hurricane Center (NHC) said in a statement.

After making a slight west-northwestward jog a few hours ago, Isaias returned to its base northwestward course. According to the NHC, the new model guidance has shifted slightly westward, showing landfall along the east-central Florida coast in about 24 hours.

In Sebastian, we can expect dangerous winds of 50 mph arriving Sunday afternoon. Tropical force conditions are expected to begin later tonight with Hurricane conditions later as the storm re-strengthens.

As a last resort for evacuees, Indian River County will be ordering a voluntary evacuation for mobile/manufactured home residents, low lying areas, and the barrier island.

The following shelters are open:

We will have another report in a few hours.