2022 Atlantic Hurricane Season was slow, but devastating in Florida 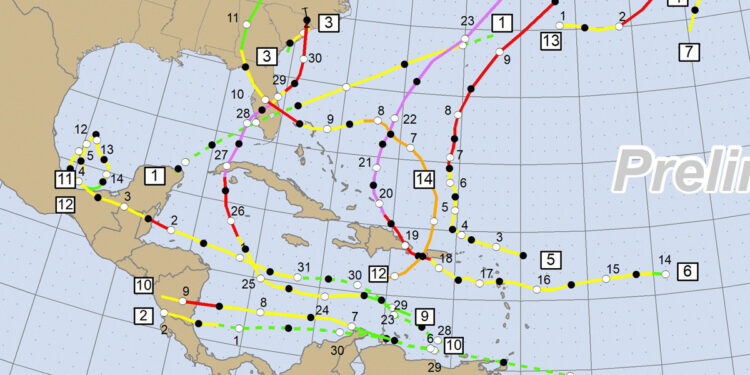 The 2022 Atlantic Hurricane Season was slightly below normal in terms of the overall strength and duration of the named storms. However, it’s a constant reminder that even “slow” seasons” can be devastating.

The season had fourteen named storms formed, eight became hurricanes, and two became major hurricanes – Category 3 or higher on the Saffir Simpson Hurricane Wind Scale. Hurricane Ian devastated the west coast of Florida in the area of Fort Myers and Pine Island. There was also reported damage in Venice and areas near Tampa.

Hurricanes Martin and Nicole formed in the basin during November, and Lisa, which developed in late October, became a hurricane early in November.

Nicole would eventually hit the Sebastian area causing damage to several docks and shutting down the Squid Lips restaurant on Indian River Drive. We’ve reached out to the restaurant owner a few times, but he never responds. We don’t know how long it will take for the business to reopen.

The storm caused deep erosion at the Tiki Bar & Grill, and the deck area was damaged. But we saw workers fixing the deck the morning after the storm.

At Fisherman’s Landing on Indian River Drive, Vice-Mayor Chris Nunn helped Charlie Sembler tie down a sailboat, preventing it from destroying the docks. Had they not been there, there would’ve been a lot of damage.

Overall, Sebastian weathered the storm well, as the eye made its way from Sebastian into Barefoot Bay.

“Based on a 30-year climatology, a tropical storm forms in November every one or two years. Although Martin did not affect land as a tropical cyclone, Nicole became a hurricane when it was affecting the northwestern Bahamas, and it became the first November hurricane to make landfall in Florida since Kate in 1985. Lisa also made landfall in Belize as a hurricane during the month of November,” The National Hurricane Center said in a statement.

In Sebastian, we are prone to getting these storms each year. So make sure you have hurricane supplies in your home instead of waiting until the last minute.