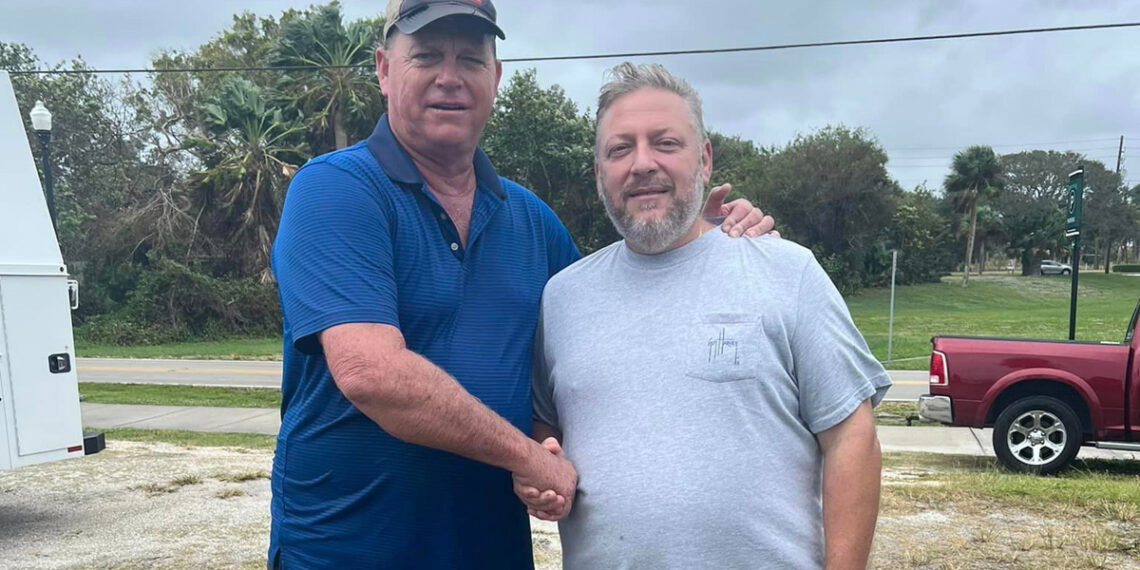 Sebastian City Councilman Chris Nunn and his wife Amber were driving on Indian River Drive the morning after Hurricane Nicole when they saw Charlie Sembler and his team trying to prevent a wayward sailboat from hitting the docks near Fisherman’s Landing.

“When visiting all the riverside marinas and restaurants, observing how they did, I also stopped to check on the city’s Fisherman’s Landing building and the working waterfront. I saw the sailboat, Charlie, and team in the water trying to move it to the center off the docks. I rallied the city to make sure we did what we could to help and avoid damaging or destroying the Sembler Dock or, when the storm moved, our city docks. Helping get that done was paramount,” Nunn told Sebastian Daily.

Beth Sembler said Nunn, a Navy veteran, acted as the city’s liaison and worked seamlessly with the fishermen, contractors, and friends who showed up to help them move the boat.

“If we lost our dock and the Fisherman’s Landing dock, then the commercial fishermen and the aquaculture farmers at our dock would have no place to work,” Sembler told Sebastian Daily.

Sembler said that for two mornings in a row, Nunn and his wife Amber showed up on site and promptly did whatever was needed to help keep the docks safe. She said everyone watched him put to good use his experience and leadership skills these last few days along the riverfront.

“I especially want to give a shout-out to his wife Amber for being a fierce woman and great political spouse. It’s not an easy job, and I’m thankful to her for sharing her husband with us so he can serve. Being an elected official is a difficult job. Thank you Amber,” Sembler said.

Ed Mangano of Orchid Island Shellfish and Nicolette Mariano also helped with the sailboat. They are clam farmers at the docks on Sebastian’s working waterfront.

“I was notified by one of my employees, Cody Hume, who is also a commercial fisherman. Then we went down to help, and everyone who works off of the Sembler dock showed up to pitch in to help. On the south side of the dock from where the sailboat hit is the area we use for our oyster nursery,” Mariano told Sebastian Daily.

Sembler said both Mangano, a long-time clam farmer, and Mariano represent “the best of Sebastian’s working waterfront.” Mariano has a bachelor’s degree in Aquaculture from the Florida Institute of Technology. She is also a Florida native and grew up in Martin County.