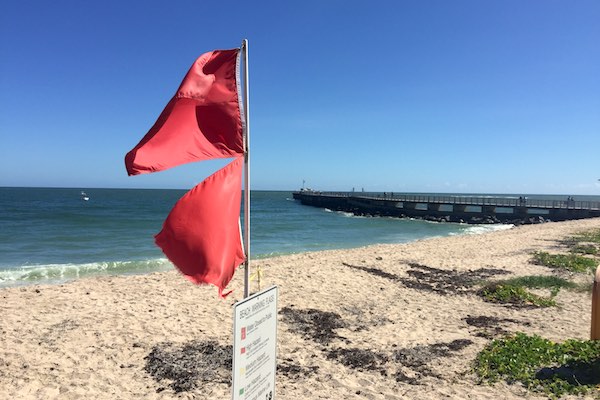 On Tuesday, Florida Fish and Wildlife Conservation Commission (FWC) confirmed the presence of Red Tide at the Sebastian Inlet, Wabasso, and John’s Island in Vero Beach.

Twenty four hours prior, there were no signs of Red Tide while at the beach or at the Sebastian Inlet. Everything appeared to be normal, no coughing, itchy eyes, or dead fish washing up on the shoreline. All of those signs were seen farther south near Wabasso and John’s Island.

But on Wednesday, everything changed when park rangers closed the park and beach Inlet.

“We’ve closed the beaches and the Inlet because of Red Tide,” a park ranger told Sebastian Daily.

The dead fish are everywhere in the state parks Tide Pool. The air quality was better than the beaches south until you walked out near the Jetty.

People, including FedEx drivers, are wearing masks on the island and near the Inlet.

We spoke with many tourists who are sad by what they see, but it hasn’t stopped them from having a vacation. Most of them are here for the season.

“It’ll clear up in about ten days or so, we’ve seen this before in other areas in Florida. This is just the worst part,” one couple from Massachusetts told Sebastain Daily.

We inspected areas of the Indian River Lagoon and didn’t see any sign of Red Tide as of Wednesday. All the dead fish are near the Inlet or near the beach.

The Lagoon is a major concern because of so many different species such as manatees, dolphins, pelicans, etc. So far, no wildlife has washed up that would indicate Red Tide in the Lagoon.

We will continue to publish updates.

Are Fish Safe to Eat When Red Tide is Present

Are Fish Safe to Eat When Red Tide is Present