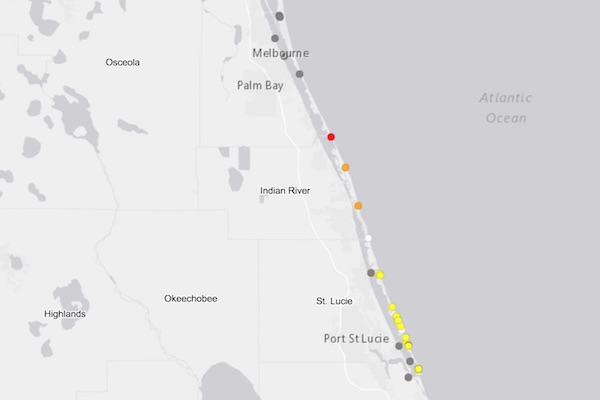 SEBASTIAN – Florida Fish and Wildlife Conservation Commission has confirmed Red Tide is active in three areas in Sebastian and Vero Beach, becoming the most severe outbreak on the East Coast of Florida.

The most severe case is at the Indian River-Brevard County border. The two other cases are near Wabasso and John’s Island Club in Vero Beach.

“IRC and City of Vero Beach access points will be closed until further notice,” a statement from county officials said.

“People, especially those with respiratory issues, are encouraged to stay away from the beaches if possible for the next 2-10 days,” the statement said.

The beach in Wabasso has been closed throughout the day.

As previously reported, Sebastian Daily was at the Sebastian Inlet Tuesday afternoon and didn’t find any evidence of Red Tide near the Jetty or the Lagoon. We will check the area again on Wednesday.

“No one is complaining today of any respiratory issues or symptoms of Red Tide,” a park ranger told Sebastian Daily. “But it’s coming, it’s only a matter of time before we see it here,” the park ranger added.

Residents in Vero Beach called Sebastian Daily Monday complaining of health problems from what they describe as Red Tide.

“We’ve been coughing all morning, and it’s only been worse since we walked the beach this morning,” a Vero Beach resident told Sebastian Daily.

“It’s definitely Red Tide, you can smell it, makes you cough,” John Naft said. “We’ve seen it before, I don’t know, ten years ago, it was even worse than this,” Naft added.

Some fishermen say they don’t believe Red Tide will be as bad in the Indian River Lagoon.

“Some of it will make it’s way into the Lagoon,” Pete Hinck, who runs the Palm Beach Pete YouTube channel, told Sebastian Daily.

Environmentalists are still very concerned of the impact Red Tide will bring to our local wildlife, such as dolphins, turtles, manatees, and fish.

Since Monday morning, Sebastian and Vero Beach residents have complained of Red Tide symptoms near the beach. There have been signs of respiratory problems, dead fish, and lifeguards wearing masks.

We will continue to provide updates.