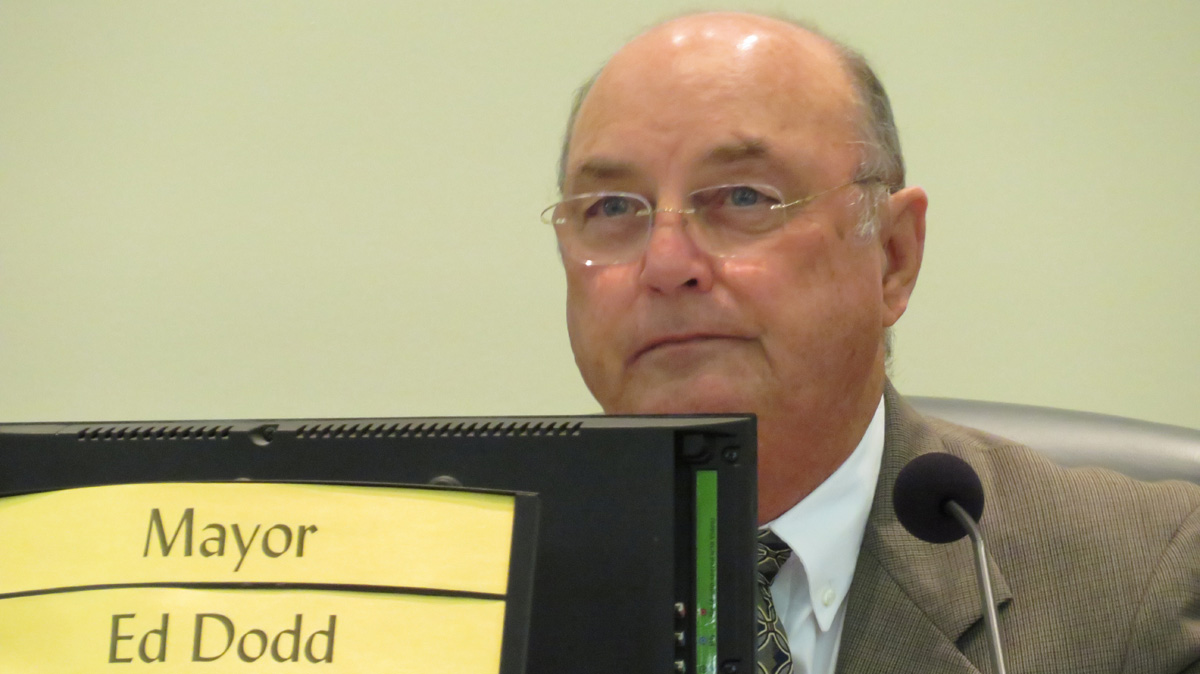 The Sebastian City Council unanimously passed a resolution Wednesday to encourage voluntary face masks in public and require them when entering City Hall.

Last month, the council voted to terminate a mask mandate for businesses since an executive order by Florida Gov. Ron DeSantis superseded the city’s ability to penalize or enforce masks.

There’s already been a policy in place to require masks and a temperature check when entering the City Chambers. Nearly all government buildings now require facial covers, including the county courthouse and DMV.

However, some residents expressed their disapproval of the resolution, stating that it violates the United States Constitution.

Mayor Ed Dodd said there is no mandate, but City Manager Paul Carlisle can execute policies on city property that requires a mask if people are unable to practice social distancing.

Dodd also does not believe it violates the Consitution. He says they are well within their rights to request masks be worn because it’s a matter of public safety.

“If you cannot socially distance, you have to wear a mask, and if you enter city property, you have to have your temperature taken. I don’t believe that there is anything in the Federal Constitution that stops that,” Dodd stated.

Sebastian resident Ruth Kuvlesky argued that it’s against the Constitution to turn people away for refusing to wear a mask or have their temperature checked. She also says the City of Sebastian has failed to offer a specific statutory code to turn people away who are not in compliance.

“You state that you’re not mandating anything, but you are mandating temperature checks, you are mandating a full facial scan to enter your building for a meeting, and you are mandating masks to enter that building as well. The Sunshine Act 286.011 states that you must refer to a specific statutory exception in order to turn away anyone from public meetings. For any reason, be that refusal for facial scanning, test-taking, signing in, masks, temperature taking, or vaccines. Not an emergency order, not an ordinance, not a mandate, it’s statutory law,” Kuvlesky told the council.

Kuvlesky then told the council they are breaking the law and will be held accountable by notices of liability to be filed. She says the masks are “illegal facial covers” and discriminatory against religious beliefs and against people with disabilities.

If a person refuses to wear a mask or have their temperature taken, they can either watch the meeting outside on a large screen or on the Internet.

However, Kuvlesky argued against the procedures, saying the accommodations outside treat people with disabilities like second-class citizens. She went on to say people should be allowed in the building without discrimination, not “kicked to the curb or the Internet.”

“We The People of the Constitution do not agree nor consent,” Kuvlesky said.

Sebastian resident Andrea Coy disagreed, saying Kuvlesky makes it sound as if all the people with underline health conditions that take extra precautions are doing it for no reason at all.

Coy also said that anyone who is not listening to the science is not being responsible. She also said science is telling us what is happening with this virus.

“Why would you want to risk my life, or anyone else’s life, because you think you know better. What’s so hard about wearing a mask to show some responsibility that you care about me and everyone else? If you don’t care about yourself, fine. But that doesn’t give you a right to disregard everyone else. Please, people, be responsible. I don’t have a problem with what the city has done with this resolution. In fact, I will go to businesses that require masks, who respect me and my health, and want to help me take care of myself and the people in my home,” Coy said.

Dodd said the mask ordinance is minimal, but it protects their city employees from COVID-19. He doesn’t think the city is doing anything invasive by having temperatures checked, nor does he believe there are Constitutional issues.

“The city manager, along with several of us, believe COVID is real and that we don’t need to subject their employees to being exposed to it,” Dodd added.

City Attorney Manny Anon also says the resolution does not violate the Constitution. He says the city is only checking temperatures at the door and not saving any information.

“We’re doing everything the CDC guidelines are saying, wear a mask and socially distance, we’re not saying anything differently,” Anon said.

“You cannot go into a courtroom without wearing a mask; they just won’t let you in the door,” Anon added.

Anon also said that he went into a DMV, and they required a temperature check and a mask.

Councilman Bob McPartlan said the issue is about common courtesy. He said the city is allowed to make reasonable rules & policies and enforce them. McPartlan does not believe it violates anyone’s rights or the Sunshine Law.

“You can’t win in this situation. I don’t know whatever happened to common courtesy anymore,” McPartlan said.

McPartlan agrees with the policy and strongly encourages people to wear masks.