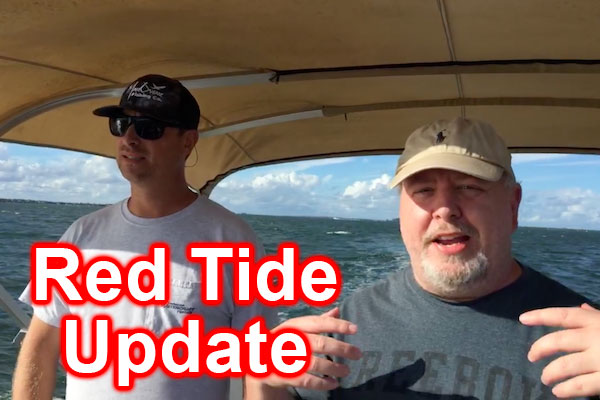 On Wednesday, we received multiple calls from people in Sebastian informing us that dead fish were washing up on the shoreline in the Indian River Lagoon. We investigated the reports and found dead fish washing up near the Tiki Bar & Grill, and south along the river near Indian River Drive.

We then met with Brian LaPersonerie of Sebastian Watercraft Rentals at the Capt. Hiram’s Resort. LaPersonerie had a theory about the fish because they appeared to be in extreme decay as if they’ve been dead awhile. Also, none of the dead fish were washing up at Capt. Hiram’s because of one of the spoil islands.

“What we’re seeing here … these fish look like they’ve been dead at least a few days, to several days,” LaPersonerie told Sebastian Daily.

LaPersonerie believes that with the right amount of elements, such as winds and a strong incoming tide from the Sebastian Inlet, the fish are being moved from spoil islands and perhaps mangrove areas.

The wind was blowing northwest Wednesday morning, then it turned north around 12 p.m., and then changed again coming from the northeast by the afternoon.

“It looks like the fish are coming off of areas like spoil islands and maybe back into the mangroves … making their way directly from a northeastern direction to the beaches across the Lagoon just from the Tiki and south,” LaPersonerie said.

On Thursday morning, LaPersonerie said some of the dead fish are now washing up at Capt. Hiram’s because of the wind change.

The fish do appear to be decayed, which means this isn’t a new fish kill. These fish were probably from the kill at the Sebastian Inlet a few days ago and had been sitting at places hard to get to by the cleanup crews.

Video: What were all those dead fish in the Indian River Lagoon?

In a recent update, we reported that there were two small areas in the Indian River Lagoon that did test positive for low amounts of Red Tide, one being near Capt’n Butchers Marina in Sebastian.

However, with the low test results, there has been no indication of any fish kills in the Lagoon as a result of Red Tide. The Lagoon is full of life, as we saw dolphins, fish swimming.

The Sebastian Inlet is a different story as Red Tide is still in the air causing people to cough. The beaches south of the Inlet, including Wabasso and Indian River Shores, remain poor. It’s so bad in areas on the beach in Vero Beach that some businesses had to close after employees complained of coughing, itchy eyes, and sore throats.

Right now, there are work crews on the beaches conducting a cleanup. All beaches in Indian River County remain closed.

County officials tell Sebastian Daily that a marine debris removal contractor has been cleaning approximately 1 to 1 1/2 miles of beach per day.

“The contractor has cleared approximately 6.5 miles of the 22.5 miles of countywide shoreline, including south and central beach. The total weight removed is approximately 70,000 pounds. This clean-up will be a rolling operation Monday – Saturday and is expected to take approximately 20 days,” officials said in a statement.

On Monday, we saw several fishermen walking out on the Jetty at the Sebastian Inlet, only to pack up and leave because of the Red Tide conditions.

Overall, things have improved since last week’s arrival of Red Tide. But no one knows for sure how long it will linger at our beaches and Inlet.

For Friday, things could steadily improve for Red Tide conditions as a cold front pushes through Sebastian and Vero Beach. The wind will change, and officials are hoping it will be enough to push the Red Tide out to sea.

Cooler temperatures are expected for Saturday night with a low of 57 degrees. Sunday is forecasted to be sunny with a high of 80 degrees.

We will continue to bring you Red Tide updates.