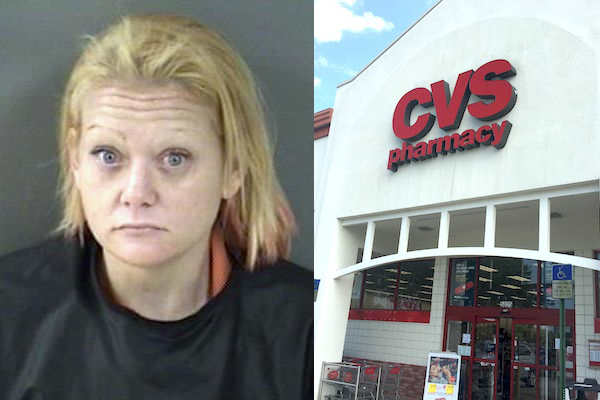 Vero Beach woman runs out of CVS Pharmacy store with a basket full of cosmetics and jewelry.

VERO BEACH – A 28-year-old Vero Beach woman was arrested after she ran out of the CVS Pharmacy store carrying a red basket full of cosmetics and other merchandise.

Heather Marie Nowak was seen by the manager running out the Vero Beach store and getting into a white Mustang.

Deputies made contact with the manager who said Nowak picked up a red shopping basket and began “grabbing several items from the cosmetic section,” according to the report.

Nowak then walked to the jewelry section and placed multiple items into the basket before running out the front door of the CVS Pharmacy.

Another deputy located the white Mustang at the Howard Johnson’s located at 1985 90th Avenue in Vero Beach.

Nowak was positively identified in one of the rooms and taken into custody.

“Nowak went on to tell me that she stole multiple items from CVS because she had just recently moved from Atlanta, GA and did not have any items with her,” the deputy said in the report.

She told the deputy that she threw the CVS basket out the window of the Mustang, which was later recovered on 8th Street.

In the hotel room at the Howard Johnson’s, deputies recovered more than $300 worth of merchandise from the Vero Beach store.

Nowak was arrested and transported to the Indian River County Jail where she was charged with Retail Theft.

Although Nowak told deputies that she just moved to Vero Beach from Georgia, she has been arrested four other times in Indian River County on charges of Felony Aggravated Assault With Deadly Weapon, and Felony Possession of a Controlled Substance.