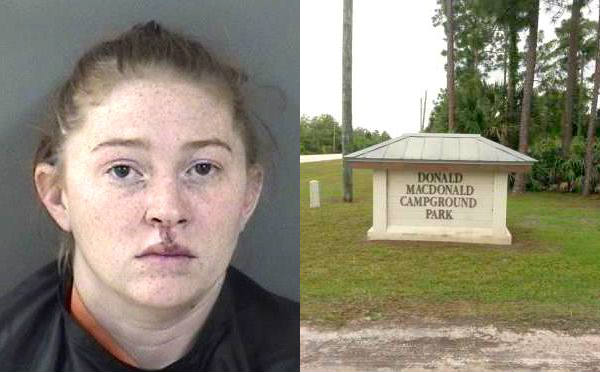 A Park Ranger at the Donald MacDonald Campground notified law enforcement of two children walking around for several hours unsupervised.

Deputies responded to the Donald MacDonald Campground where the Park Ranger had the children.

Several camp residents informed the Park Ranger that the children were unsupervised for several hours, from approximately 8:00 a.m. until 1:45 p.m. when they were found near Roseland Road.

The children told deputies that their mother was in a tent, and showed the location.

“Both children were filthy and not wearing shoes. Both of them were wearing adult size clothes and were not dressed warmly enough for the cold weather,” the deputy said.

The camp lot was filled with trash where the tent was. The mother, identified as 26-year-old Janeen Robbins, was found sleeping in a tent near a Vodka bottle which was nearly finished, according to the report.

“I could smell the odor of an alcoholic beverage coming from her breath,” the deputy said. “I asked Robbins if she had anything to drink and she informed [me] that she drank a lot of the vodka.”

Robbins said her boyfriend was at work, and they all live in the tent at the campground.

Another deputy observed a raised rub rash on one of the children consistent with sitting in a wet diaper for an extended period of time, the report said.

A witness came forward and told deputies the children were left alone since 8:00 a.m. running around unsupervised at the campground.

DCF was notified and temporarily took the children into their custody.

Robbins was arrested on a charge of Felony Child Neglect. As of Tuesday morning, she’s still in jail on a $1,500.00 bond.