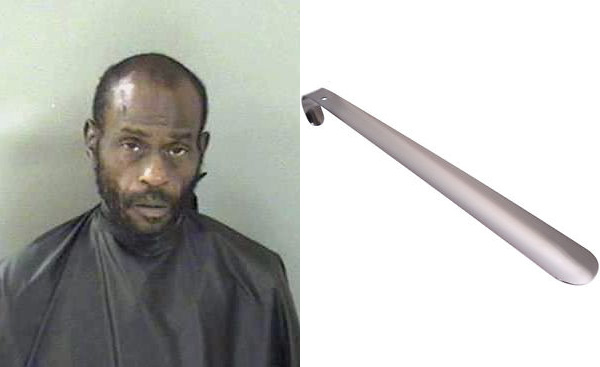 VERO BEACH – A man was arrested Thursday after he struck another man with a metal shoe horn for “playing stupid” over a $10 bill, according to the Indian River County Sheriff’s Office.

Tommy Lee Northard, 53, was charged with Battery after striking the victim four times on each arm.

The victim told a deputy that he was sitting down minding his own business on 33rd Avenue when Northard began accusing him of stealing a $10 bill that he allegedly dropped on the ground.

Northard then began hitting the victim on both arms with the shoe horn. When the victim screamed for help, Northard took off running.

Deputies found Northard not far from the location walking with a metal shoe horn in his hand.

Northard told police that he had dropped a ten dollar bill on the ground. When he went back to retrieve it, it was gone. He said the only person in the immediate area was the victim.

The subject said the victim “played stupid” when he asked for his money back. So he attacked him with the metal shoe horn.

Northard was transported to the Indian River County Jail where he is being held on $500 bond.