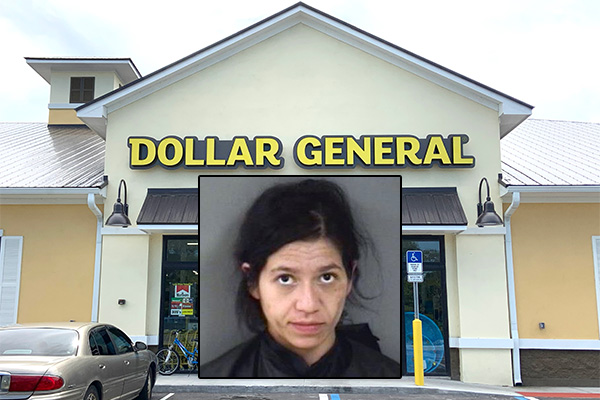 Ivanna Karime Guajardo, 29, told police she was exploring inside the Dollar General store for her birthday in Sebastian, Florida.

SEBASTIAN – A woman was arrested after causing havoc inside a Dollar General store because it “was her birthday and she was just trying to have a little fun,” according to the Sebastian Police Department.

Ivanna Karime Guajardo, 29, entered the Dollar General, located at 9200 Sebastian Boulevard, last Sunday to do a little shopping. At approximately 9:30 p.m., Guajardo ran to the back of the store and barricaded herself in a stock room. The manager asked her to come out, but she refused, according to the report.

The manager told police that Guajardo went to the rear of the store and entered a clearly marked area for employees only. As the manager followed Guajardo into the area, he asked her to leave.

“Guajardo told him she wouldn’t leave and she just wanted to have some fun and explore. She then began to run in between carts in the back room filled with items awaiting to be stocked,” the officer said.

Guajardo then began to climb up on shelves throwing boxes of greeting cards and eyeglasses to the ground in order to climb higher. As she climbed up near the roofline, she sat on a wall mounted water heater and acted like a gargoyle.

Police then made contact with Guajardo and asked about her behavior in the store.

“She stated it was her birthday and she was just trying to have a little fun, cause a little havoc, enjoying her day exploring,” according to the affidavit.

Guajardo acknowledged that she shouldn’t have been in the back room and was sorry for damaging the merchandise. Police also asked her if she climbed to the ceiling to sit on top of a water heater.

“Yeah I did, it was hilarious,” Guajardo said, according to the report.

Guajardo was charged with criminal mischief and was transported to the Indian River County Jail where her bond was set at $2,000.

Sebastian Man Accused of Pushing Victim Out of Truck