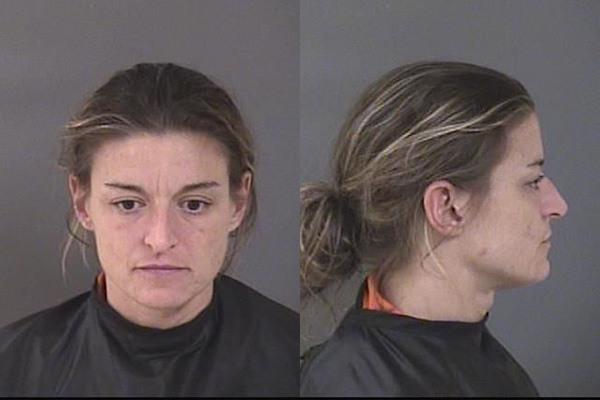 On Tuesday, deputies responded to the 400 block of 11th Court in Vero Beach in reference to a residential burglary in progress. The caller advised that the suspect was inside his house and he could see her through one of his security cameras.

The caller said his ex-girlfriend, identified as 37-year-old Kristina Marie Cleveland, was inside his home and accused her of stealing some firearms he kept inside a closet. After seeing Cleveland on camera, he ran home and noticed two of his firearms were missing. One was a .22 caliber Ruger MK II, and the other was a Colt SMG rifle 9mm with a full auto-selection, the affidavit said.

The victim advised that he could track Cleveland through an old phone she had in her vehicle. Deputies responded to the address given by the victim, according to the report.

A deputy approached the vehicle at the address and made contact with Cleveland, who was sitting in the front passenger seat. In plain view, the deputy observed a firearm in an open bag which was located in between Cleveland’s legs on the floorboard, the affidavit said.

In the bag was the .22 caliber Ruger MK II, and under the vehicle by the passenger door was a Colt SMG 9mm rifle. Also in the bag were several green and white pills.

“When she saw the firearms, she threw the rifle under the vehicle because she knew she was a convicted felon,” the deputy said.

Cleveland told deputies that she used to live at the address with her boyfriend. She vacated the victim’s home on Monday. Cleveland said she made arrangements to pick up her belongings on Tuesday. She picked up a bag that was left inside the home.

“Cleveland said she had no idea that the firearms were in her bag when she took the bag from [the victim’s] house,” the deputy said.

However, as deputies continued to question Cleveland, she finally admitted to stealing the firearms to sell them for drugs in Gifford, according to the affidavit.

According to jail records, Cleveland has been arrested approximately 16 times in Indian River County.