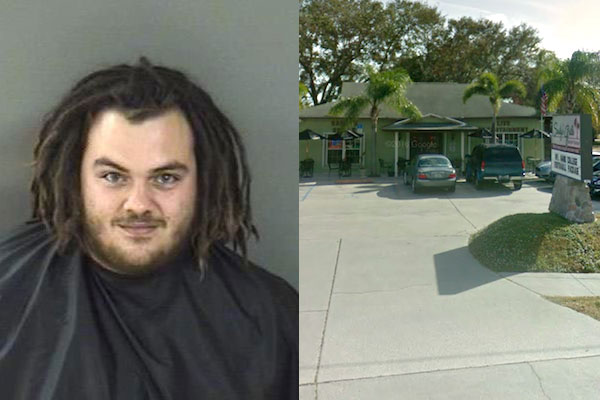 Nicholas Martin was charged with Felony Aggravated Battery after striking a man with a glass mug at Sandy's Grille in Sebastian.

SEBASTIAN – A 22-year-old man is still in jail Thursday after smashing a glass mug across man’s face Friday night at Sandy’s Grille in Sebastian.

Police arrested Nicholas Martin at the 400 block of Biscayne Lane and transported him to the Indian River County Jail where he was charged with Felony Aggravated Battery. Martin’s bond is set at $10,000.

Nicholas, an employee at Sandy’s Grille located at 171 Sebastian Blvd., was in an altercation with another man named Duncan McNeil.

Officers arrived at the establishment and saw Duncan holding a blood-soaked cloth over his left cheek, the report said.

“When he removed the cloth, I observed a large 2 to 3-inch laceration that was heavily bleeding,” the officer said.

Officers spoke to three employees of Sandy’s Grille who witnessed the altercation. They said Nicholas exited the establishment and walked to the front of the building where Duncan and fellow employees were sitting.

It was at that time when they saw Nicholas and Duncan arguing about an unknown issue, according to the report.

“At one point Nicholas made a comment about how after he puts his two weeks notice in he was going to beat Duncan up. Next, Duncan stood up from his chair at which time Nicholas grabbed a nearby 16oz glass mug and smashed it across Duncan’s left cheek, causing him to trip over a nearby curb,” the officer said in the report.

Nicholas then fled the establishment in his vehicle.

Officers went to speak with Nicholas at his home in Sebastian where he admitted to striking Duncan in the face with a glass mug. However, he noted that Duncan initially hit him first with a light slap, which caused him to lose his temper.

Nicholas was placed under arrested and transported to the jail for booking.

Police said Duncan’s cut required multiple stitches and “will likely result in scarring and permanent disfigurement,” according to the affidavit.