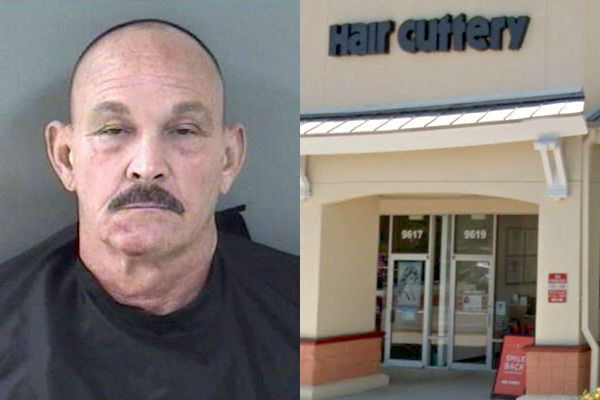 SEBASTIAN – A man was arrested after he broke a window and burglarized the Hair Cuttery on Wednesday at approximately 10:05 p.m. in Sebastian.

Police responded to a burglary in progress at the Hair Cuttery salon at 9619 U.S. Highway 1 where witnesses said a man broke the window and walked around the building.

Once behind the building, officers spotted Newsome lying on the ground and attempting to crawl underneath a white van to conceal himself.

Police gave verbal commands for Newsome to come out from under the vehicle, which he did. But he took an aggressive stance to the officers.

“It appeared the subject was going to fight us and was refusing to listen to our commands,” police said. “The subject was given numerous commands to lay on the ground and he refused to do so.”

Newsome struggled with officers while being detained.

One witness said an employee at the Hair Cuttery told him the shop was just broken into. When he walked to the front of the store, he observed a white man wearing blue pants and a flannel shirt. Newsome then saw the witness and panicked.

Newsome then walked out of the back door at which time the witness confronted him.

“Newsome stated that he was just checking his store that was broken into,” the witness told police.

Another witness saw the broken glass on the sidewalk and then realized the business was broken into. She was Newsome in the back of the store with a hat on.

Both witnesses identified Newsome as the man walking around in the store during the burglary.

It was later learned that Newsome was recently fired from the business and is suspected of previous burglaries from the same Hair Cuttery.

Newsome was transported to the Indian River County Jail for processing.