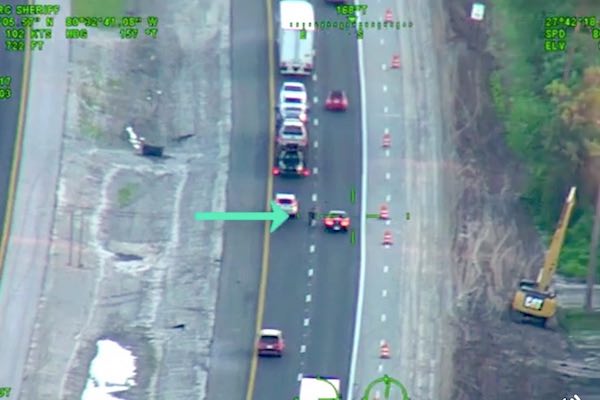 Motorcycle was doing speeds of 130 mph on I-95. Photo by Indian River County Sheriff's Office.

SEBASTIAN – On Sunday at approximately 5:52 p.m., Indian River County Sheriff’s Deputy Ron Adamson was patrolling an uncompleted subdivision which had been abandoned near the 9900 block of U.S. 1 in Sebastian.

Deputy Adamson was on foot when he observed two subjects, a male driver identified as 25-year-old Zachary Marcinek and a female passenger, on a motorcycle. They attempted to flee from Deputy Adamson who motioned with his hand and gave the driver a verbal order to stop. The driver sped passed the deputy, striking him and causing him to fall to the ground.

A vehicle description was given to on-duty units via the law enforcement radio.

At approximately, 6:06 p.m., an officer with the Fellsmere Police Department saw the suspect vehicle on County Road 512 at 108th Avenue. A traffic stop was attempted, but Marcinek fled and headed south on I-95.

Units from the Indian River County Sheriff’s Office joined the Fellsmere officer and followed the fleeing motorcycle into St. Lucie County. Once the Indian River County agency’s helicopter was able to locate and follow Marcinek, who had reached speeds of 130 mph, ground units terminated their pursuit. Pilots maintained observation of the suspect and relayed location information to the St. Lucie County Sheriff’s Office.

At approximately 6:22 p.m., Marcinek ceased his efforts to flee near Indrio Road and Kings Highway and was apprehended by the Saint Lucie County Sheriff’s Office. Marcinek and his passenger are being questioned by detectives as of this media release. Any arrests will take place in Saint Lucie County.

Deputy Adamson, a 22-year law enforcement veteran, sustained an injury to his hand and head. He is being treated at a local hospital.