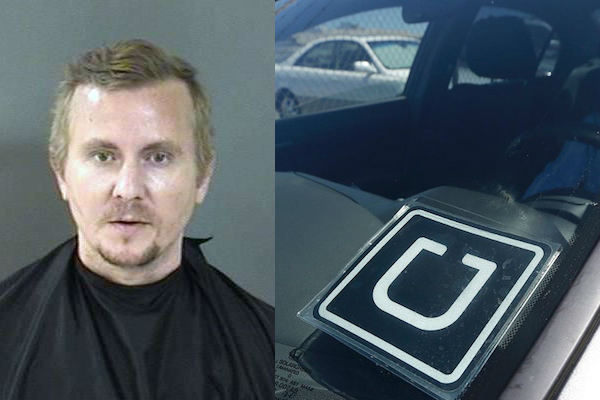 VERO BEACH – A Uber driver asked the police to pull him over after witnessing a drug transaction with his passenger, according to the report.

Maximillian Nadolny, 33, called Uber from the Bungalow Bar in Vero Beach and asked the driver to stop at the 7-Eleven store at 2032 U.S. Highway 1 where the driver witnessed a drug transaction, the report said.

The Uber driver called the Vero Beach Police Department and requested them to pull him over since there were drugs in his car.

A traffic stop was initiated by police and officers asked the driver to step out of the vehicle.

The driver advised that while the traffic stop was initiated, Nadolny “took something out of his right front pocket and threw it out the window,” the officer said.

Police found a clear plastic baggie containing a white rock substance that field tested positive for cocaine, according to the arrest affidavit.

Nadolny denied that the baggie was his, stating that he threw a cigarette butt out the window during the traffic stop.

However, the Uber driver told police that Nadolny was not smoking in his vehicle.

Nadolny told police that he did stop at the 7-Eleven but only went inside the store to buy gum and cigarettes. He denied making any kind of drug transaction outside of the store.

When police mentioned the type of vehicle he allegedly made the drug transaction with, Nadolny said it was “his friend from high school” just saying hello.

Nadolny then changed his story and said he gave his friend $20 that was owed from a couple weeks prior.

“Nadolny’s story continued to change every time I asked him a question,” the officer said in the report.

Vero Beach police arrested Nadolny and booked him into the Indian River County Jail. He was released Friday morning after posting a $5,000.00 bond.