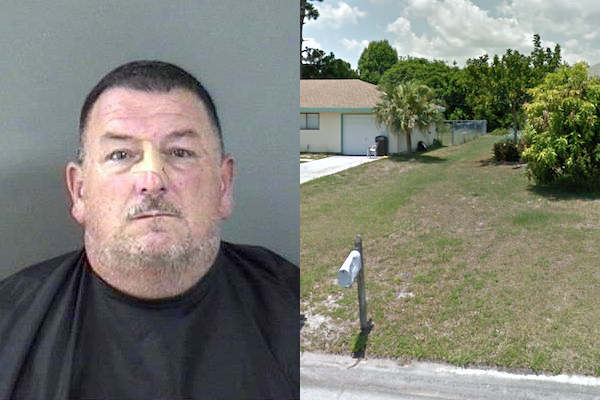 VERO BEACH – The Indian River County Sheriff’s Office received a call from the 2300 block of 12th Avenue about two men fighting in a yard over a lawn mower in Vero Beach.

Deputies made contact with the Vero Beach victim who had a “visible bloody lip.” He told law enforcement that he was mowing his yard when his neighbor, identified as 54-year-old Jeffrey Michael Meurer, began yelling “don’t you get your grass in my yard,” according to the report.

The two began to argue before the victim decided to ignore Meurer and continue with his mowing.

“Seconds later, I feel a hard impact to my face which started me. I jumped off my mower and saw Meurer holding a wooden rake as if it were a bat,” the victim said.

The two men then got into a physical altercation which lasted a few seconds. The victim said he punched Meurer in self-defense. Meurer then “took off running into his home,” the report said.

Meurer, who had a small laceration to his nose and was still bleeding, told deputies that he mows his yard with a push mower and a bag so that it collects the cut grass.

However, Meurer is mad that his neighbor doesn’t use a bag for his riding mower. He says the grass blows into his yard and that he’s “tired of that.”

Meurer said he confronted his neighbor about the grass, which led to an argument. He then said his neighbor tried to run him over with his riding mower.

“So I defended myself by hitting him with the back of my rake,” Meurer said.

Deputies then made contact with a witness who saw the entire showdown between his two neighbors. He said the victim was mowing his yard when Meurer picked up the rake and hit him.

“I couldn’t believe what I had just seen. [The victim] then begins to fight with Meurer until he runs into his garage and closing it behind him,” the Vero Beach witness told deputies.

Meurer was arrested on a charge of Battery and transported to the Indian River County Jail for booking.