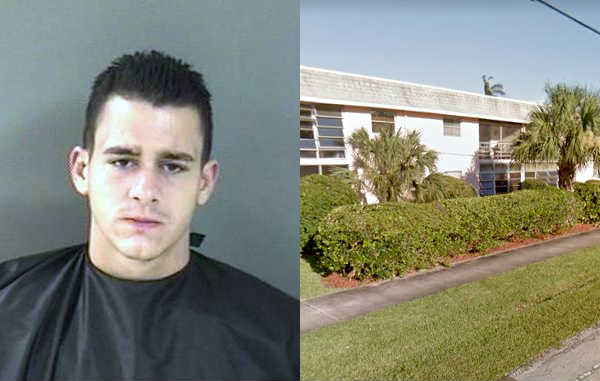 VERO BEACH – The Indian River County Sheriff’s Office received a call about an intoxicated man yelling obscenities at people from the bushes at the Topic Grove Villas and Jungle Club in Vero Beach.

A woman told deputies that she was walking on the sidewalk with her 7-year-old child when a man came out of the bushes and began screaming at her and the child for no apparent reason.

Joseph Samuel Jones, 22, who was also arrested last month for yelling obscenities at vehicles in Vero Beach, was seen laying in a flower bed behind some bushes.

The deputy saw an empty 99 Bananas Schnapps liquor bottle next to Jones.

“I further tapped on the male’s leg and identified as the Sheriff’s Office. The male opened his eyes, mumbled some words, and then closed his eyes again,” the deputy said in the report.

The deputy told Jones that he needed to wake up, but he continued to close his eyes.

Jones finally stood up and was unsteady on his feet due to his intoxicated level.

While being detained, Jones’ “speech was very slurred, and he would often become belligerent and start to call me names,” the report said.

As he was being placed in the patrol vehicle, Jones became uncooperative and had to be physically placed in the car. Once in the car, he continued to be belligerent and would slam his head into the cage or the rear door.

“It is my belief that if Joseph had been left in the bushes by himself due to his state, he would have continued to scare other citizens that kept walking by and would continue to be a disturbance by yelling and screaming as they walked by,” according to the Vero Beach report.

Jones was transported to the Indian River County Jail where he was charged with disorderly intoxication.