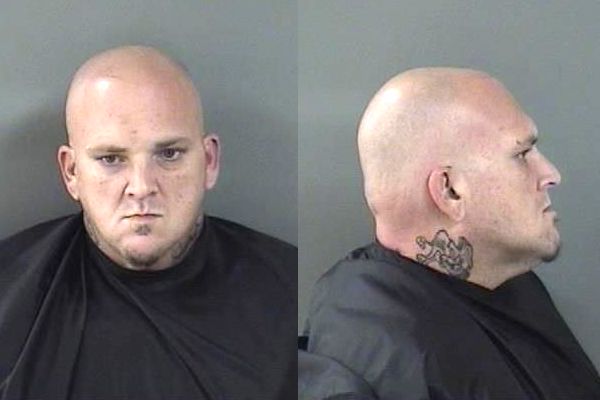 VERO BEACH – A man who was arrested for trespassing at Filthy’s Bar in Vero Beach was causing a lot of problems for the officer on the way to jail.

Eric Eugene Cotter, of Vero Beach, was issued a trespassing from the bar by police Thursday morning at around 12:50 a.m.

However, Cotter returned to the bar again a few minutes later after Vero Beach police left the scene.

The officer arrested the 38-year-old but then realized Cotter urinated on himself, according to the report.

Cotter, who told police he works as a dishwasher, appeared to have difficulty maintaining his balance and emitting the odor of an alcoholic beverage whenever he spoke, the report said.

Once he placed Cotter in the police cruiser, he began yelling profanities such as “fu** you” at the officer.

On the way to Indian River County Jail, Cotter began banging his head on the vertical metal bars guarding the rear window of the police vehicle.

The officer attempted to calm him down, but he continued to bang his head. Cotter was told he would be placed in hobbles if he continued.

A hobble restraint secures the person’s ankles, knees, and elbows. It allows for transporting subjects in a seated, upright position while preventing the prisoner from kicking doors or windows.

The officer decided to place him in the hobble to prevent Cotter from harming himself.

When the officer opened the door to speak to Cotter, he spit, causing saliva to strike the officer in the face.

Two officers made several attempts to place Cotter in the hobble restraints. Once he was secured, Cotter was transported and booked into jail.