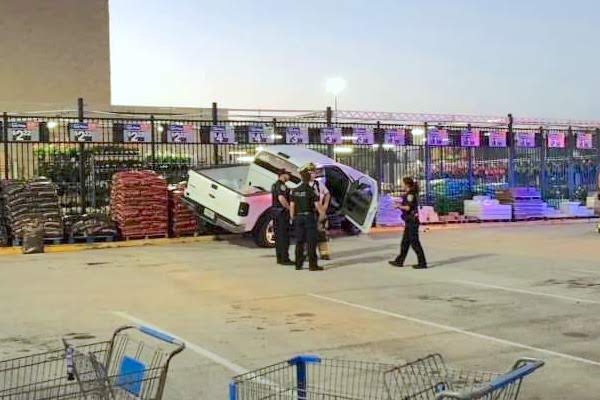 Man drives truck on mulch in outside Garden Center at Walmart in Sebastian, Florida.

SEBASTIAN – Police were dispatched Thursday to the Walmart in Sebastian in reference to a Ford pickup driving “erratically in the parking lot,” reports show.

Police arrived at Walmart and spotted the truck crashed into the Garden Center area of the parking lot. The truck had “its left front tire on top of a large stack of mulch,” according to the affidavit.

“Due to the elevation of the mulch bags, the vehicle was leaning to the right with both left front and rear tires off the pavement,” the officer said.

Officers removed the driver from the truck, later identified as 34-year-old Kevin Chada of Sebastian, who was “acting in an aggressive manner,” the affidavit said.

“Chada was not forming complete sentences, was slurring his words and making tense” body movements,” the police report said.

Chada told police that he had three needles inside the truck along with a bottle of alcohol. There was a “used needle” found in the center console, which Chada said was Heroin. He told officers that he injected Heroin while in his vehicle. Chada also admitted to ingesting Methamphetamine, according to the report.

Police discovered that Chada was already on probation for Heroin possession with the following stipulations: remain confined to an approved residence, submit to a search, and not to consume or ingest drugs or alcohol. Chada’s license was also suspended.

Chada was charged with driving on a suspended license, possession of drug paraphernalia, violation of probation, and felony possession of a controlled substance.

As for driving under the influence, we reached out to the Sebastian Police Department.