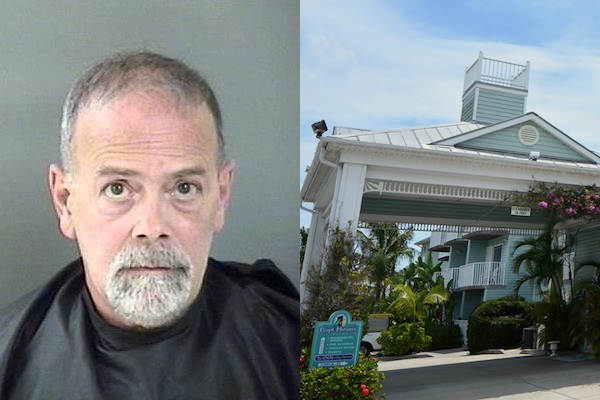 Man arrested at Captain Hiram's Resort for disturbance in Sebastian.

SEBASTIAN – A 60-year-old man was arrested after causing two different disturbances in the lobby of the Captain Hiram’s Resort, according to the Sebastian Police Department.

Patrick Allen McManus, of Hialeah, was visiting Sebastian and staying at the Captain Hiram’s Resort when he was in a verbal altercation with a female subject.

McManus was asked to return to his room, and police were called. Officers said he had slurred speech and was unable to remain steady on his feet.

“Patrick was very uncooperative and was very argumentative with law enforcement. He was also very reluctant to go into his room for the remainder of the evening despite advice from law enforcement,” the officer said.

About an hour later, the Captain Hiram’s Resort called the police again about the same subject causing a disturbance in the resort lobby.

“During the disturbance, Patrick snatched a signed copy of his room agreement, which he signed during his purchase of the room,” police said.

Patrick then returned while crumpling the paper and said he was not going to pay the additional charge for causing the previous noise disturbance at the hotel.

As officers arrived, they saw Patrick still at the front desk and actively arguing with one of the employees about the conditions of his rental agreement.

Police asked Patrick to return to his room multiple times and address the issues with the resort the following morning. He was eventually escorted out of the lobby and back to his room.

However, on the way back to his room he began to make a scene with officers.

Patrick was arrested and transported to the Indian River County Jail where he was charged with Resisting Arrest and Disorderly Intoxication.