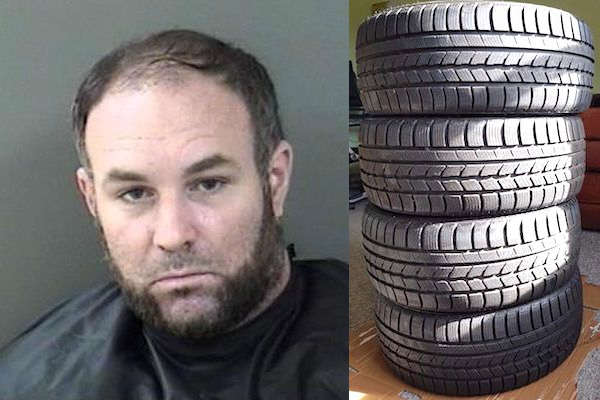 A man tries to make a fraudulent refund in the tire department at the Vero Beach Walmart.

VERO BEACH – A 31-year-old man was arrested on charges of grand theft after he tried to steal some tires at the Walmart store in Vero Beach, according to the Indian River County Sheriff’s Office.

Anthony Lance Hays, who told police he works as a roofer in Vero Beach, went to the Tire and Lube Express register and purchased a set of 4 Nexen 225/40R28 tires and paid $445.12 in cash.

A Walmart associate went outside and verified the tires to be the correct ones ordered and loaded them into Hays’ SUV.

Hays then drove the SUV to the garden area and parked it near another vehicle. He then moved the new tires to the other vehicle, and replaced them with a new set of Goodyear tires.

Hays returned to the register and said he was given the wrong tires and would like a full refund. Walmart gave him a cash refund of $445.12.

After Hays left the store, one of the employees had a suspicion about the refund and the tires. He reported it to their loss prevention department and they reviewed the video surveillance footage.

The video showed the employees load the SUV with the right tires, then it showed Hays driving to the garden area and switching the tires from another vehicle.

The Indian River County Sheriff’s Office was called and the plate number was retrieved from the video surveillance footage.

Deputies went to the residence listed on the plate and spoke to the suspect’s mother, who he lives with. The mother told deputies her son was at Lowes in Vero Beach.

Hays was located at Lowes where he was questioned about the tires. He denied swapping them out to get a fraudulent refund. He insisted Walmart gave him the wrong tires.